PM says there will be no concessions made on fiscal discipline 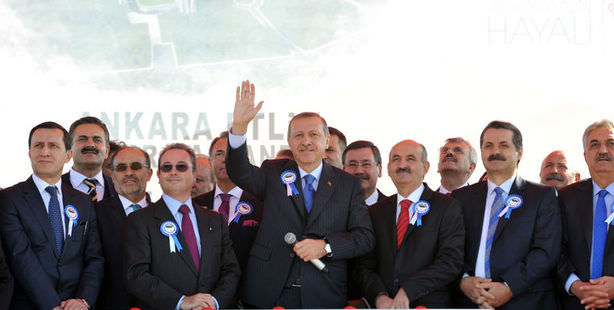 Speaking to fellow party members at an AK Party group meeting on Tuesday, Prime Minister Erdoğan emphasized that there will be no concessions made to the tight fiscal policy despite the upcoming elections. The Prime Minister also announced that there have been increases in the budget allocations for education, health and social spending.

Prime Minister Recep Tayyip Erdoğan delivered a series of significant messages at an assembly group meeting held on Tuesday for the ruling Justice and Development (AK) Party. "Despite there being two elections in 2014, we have not made any concessions on our fiscal discipline, emphasized Erdoğan as he shared his views of the Parliamentary Planning and Budget Commission evaluations on the 2014 budget, which also commenced yesterday.

THE ELECTION ECONOMY IS A THING OF THE PAST

WE ARE NEARING OUR TARGET

"We will be legislating this budget by the end of December. Ever since the first budget we prepared in 2002, each budget that followed has become even larger and more encompassing. There was an increase in the rate of minimum wage and inflation resulting in further fiscal discipline. We have increased education, health and social spending in every budget. We have also made significant increases in these areas in the 2014 budget. Despite the fact that there will be two elections in 2014, we have made no concessions on fiscal discipline and have not brought in the concept of an election economy to this natiom's agenda. With both our mid-term program and our 2014 budget, we are closer to reaching our 2023 targets," stated Erdoğan.

Prime Minister Erdoğan also remarked on Turkey's booming industry, offering up the example of the total tourism revenue in 2002 which was 8.5 billion dollars soaring to 26 billion dollars in 2012 and the number of visitors rising from 13 million ten years ago to the 32 million figure experienced in 2012. Erdoğan further stated that the 16 billion dollar tourism revenue acquired in the first eight months of 2012 has reached 19 billion dollars during the same timeframe this year. "A total 24 million tourists visited our nation this year," added Erdoğan.

Prime Minister Erdoğan also mentioned that according to the World Tourism Organization's report on the first eight months of the year, Turkey became the top three country, following Thailand and Hong Kong to see the highest increase in tourism revenue.

"Mardin never used to receive many tourists, however over the holiday the hotels in this province of ours were nearly completely full. This shows that if terrorism does not pose problems in our Eastern provinces then more tourists will visit the region and investments will increase," said Erdoğan.

On Tuesday, Prime Minister Recep Tayyip Erdoğan also attended a groundbreaking ceremony for the Etlik City Hospital. This hospital, to be built in the capital for 2.4 billion liras, will serve 50,000 patients daily making it one of the largest medical complexes in the world. Prime Minister Erdoğan felt that the 42 months allocated for the completion of the hospital was extensive and managed to have the Astaldi-Türkerler consortium vow to complete the project in 30 months, which is one year earlier than originally planned. Reminding that last month, the protocol was signed for the construction of 15 urban hospitals in 14 provinces, Erdoğan said, "We continue to conduct the openings of these hospitals one by one. The names of the planned hospitals are a surprise; however we will be revealing them prior to their opening."