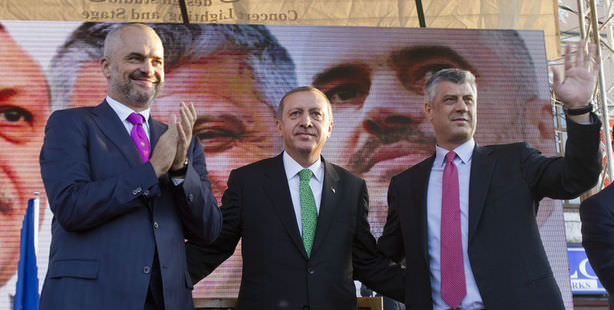 A new terminal building and facilities for Kosovo’s Pristina Adem Jashari International Airport, the fruits of a 140 million euro investment by Limak, opened its doors yesterday. Speaking at the opening ceremony, which was attended by Prime Minister Erdoğan and his Kosovan and Albanian counterparts, Limak Board of Directors Chairman Özdemir stated, "This terminal will be the door that opens for Kosovo to the world.”

Limak, the Turkish construction firm, which took on the building and operations of Istanbul's Sabiha Gökçen International Airport in 2008, joined forces with France's Aeroport de Lyon in 2010 to build a new airport terminal building and accompanying facilities for Kosovo's Pristina International Adem Jashari Airport to a tune of a 140 million euro investment.

With the new terminal building and additional facilities going into operation, the current two million-passenger capacity of Kosovo's sole international airport will increase to five million.

Speaking at the opening ceremony, Limak Holding Executive Board Chairman expressed the hopes that the Pristina Airport will experience the same success Istanbul's Sabiha Gökçen International Airport has in recent years.

THE MOST MODERN AIRPORT IN THE BALKANS

After touring the Pristina Adem Jashari Airport, Prime Minister Recep Tayyip Erdoğan stated, "Kosovo has now been given the most modern and beautiful airport in the Balkans. Investments in Kosovo by Turkey's private sector has now reached 335 million euros, while investments in our contracting sector have reached 800 million euros."

Albanian Prime Minister Edi Rama stated that those present were witnessing a historical moment for Kosovo. Expressing how pleased he was to participate, Rama highlighted the close fraternal bonds between Albania and Turkey.

THIRD LARGEST AIRPORT IN THE REGION

The new terminal building and addition facilities, the result of a 140 million euro investment, were built based on a modern architectural design and is an environmentally friendly 'smart' building. With a total 610 employees, over the years the Pristina international airport has been on a rising trend, ranking the airport third in annual passengers amongst airports in ex-Yugoslavian countries, following the Belgrade and Zagreb airports.

ELECTRICITY TO ALSO COME FROM TURKEY

Nihat Özdemir also announced that following the airport investment, a partnership formed between Çalık and Limak will provide all of Kosovo's electricity distribution services within 2013. Özdemir also added that by investing 300 million euros into the system within the next 15 years, the infrastructure of the power grid will be brought up to European standards.