Transport Minister says excitement at a peak for Marmaray opening 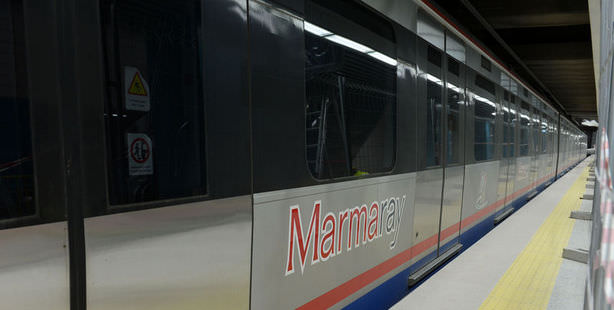 Transport Minister Binali Yıldırım discussed the upcoming opening of the historical Marmaray under-sea tunnel project with A Haber on a live broadcast Friday. Set to open on October 29, which coincides with Turkey’s Republic Day, Yıldırım says excitement for the project's opening has reached a peak.

"Excitement is at a peak. Foreign presidents and prime ministers have been invited to the opening of this grand project," said Yıldırım adding that everything is proceeding as planned for the grandiose opening of the Marmaray project. "All of our comrades are ready and waiting and our Ankara cadre is now in Istanbul. Everything is going as planned and we have not been faced with any hang-ups," stated the Transport Minister.

Explaining that the deepest undersea tunnel in the world was constructed as part of the Marmaray project, Yıldırım stated, "The U.S. has an undersea tunnel that is 44 meters deep, whereas ours is 62 meters deep. This is also the first tunnel to connect two continents. This project ties both sides of Istanbul together within a matter of three minutes,"

THE THIRD BRIDGE, OTHER PROJECTS PLANNED

Transport Minister Yıldırım also touched upon the ensuing debate regarding the building of a third Bosphorus Bridge in Istanbul by stating, "This Bridge is not a luxury it is a necessity." Pointing out that everyone is well aware of the reality of Istanbul's traffic issues, Yıldırım said, "We lose 3.5 billion dollars of our fortune every year due to the time spent waiting in traffic. Once we realize the Marmaray project, the third bridge and other planned projects, transportation will be eased by 25%."

A series of new rail lines have been established by the Istanbul Electric Tramway and Tunnel General Management (İETT) for the integration of the new Marmaray project. Lines offering services to Ayrılık Çeşmesi, Üsküdar, Sirkeci, Yenikapı and Kazlıçeşme for passengers coming and going from the Marmaray tunnel will also be going into service following Tuesday's grand opening.