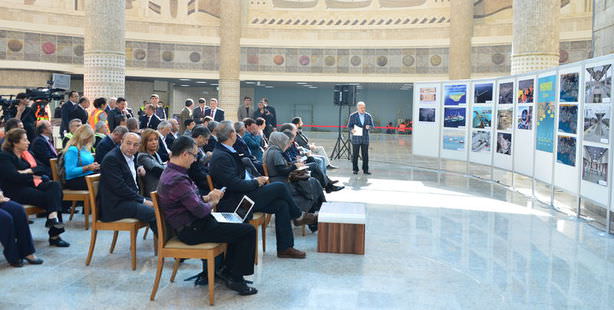 Just hours remain before the history-making Marmaray rail tunnel is opened to the public. Deemed the “Project of the century’, the undersea rail tunnel, which will connect the continents Europe and Asia in Istanbul and relieve a significant amount of the metropolis’ traffic will be opening on Tuesday, Turkey’s Republic day. The project, which cost 5.5 billion TL, was not only built able to sustain a 7.5 magnitude earthquake, but is also a technology masterpiece and somewhat of a city museum.

Turkey will soon be realizing a dream that spans back 15-years. The opening of the highly anticipated Marmaray rail tunnel constructed under the Bosphorus takes place on Tuesday, which is the 90th anniversary of the founding of the Turkish Republic. Not only is the Marmaray rail tunnel the result of a 150-year old dream of connecting Asia and Europe in Istanbul, but it is also a global project which will provide a continuous railway route connecting London to Beijing. In other words, this new project could very well be considered the global world's new "Silk Road".

On Sunday, we had the opportunity to partake in a final tour prior to the official opening on Tuesday, in which we met up with Communications, Transportation and Maritime Minister Binali Yıldırım, who extended the invitation, in Yenikapı Station.

Just entering the station one cannot help but be impressed. This is a chic structure that melds architecture which reflects Turkey's deeply rooted history and the world's most advanced technology. The station has also become an extraordinary city museum, which exhibits pieces that span back 2,000 years into Turkey's history. Transport Minister Binali Yıldırım, who happens to be the most successful minister of the decade, described to us the history of the Marmaray project and answered our questions leading up to the highly anticipated opening tomorrow. Explaining how the project fruitioned, Yıldırım stated, "The idea of somehow connecting the two continents was first proposed in 1860. It was debated from time to time however for many decades no one honed in on it. In the 1980's the idea was once again brought to the agenda in Turkey. The first serious initiative was taken during the 57th government's reign and in the year 2000, a consultancy agreement was signed. The foundation was laid in 2004 after the AK Party came to power and at that time, the completion date of the project was set for 2009. However, due to delays as a result of archaeological excavations, the project's opening was postponed until now."

THE ONLY ONE OF ITS KIND IN THE WORLD

Minister Yıldırım also shared a series of significant technological information pertaining to the project, such as the fact that it cost 5.5 billion TL and for now a 14 kilometer-long section of the railway will begin operating as of tomorrow which includes connections between Kadıköy's Ayrılıkçeşme on the Asian side and Zeytinburnu's Kazlıçeşme on the European side. There will also be connections to the Taksim-Hacıosman and Bağcılar metros. Everything was accounted for in terms of connections from the tunnel built 62 meters under the ground says Yildirim, adding, "There is no other rail project in the world that involves a tunnel 62 meters under sea."

Minister Yıldırım also points out that the fact that a series of archaeological excavations resulted in delaying the project's end date, in effect ended up in opening the doors to an entirely new form of prosperity. Previously believed to have a history spanning back 6,000 years, the excavations revealed that in fact this history spans back 8,500 years. "Marmaray has gone into history as a project that reestablishes Istanbul's history," says Yildirim.

With the Marmaray rail tunnel, transportation between Üsküdar and Sirkeci will only take three minutes and the distance between Ayrılıkçeşme and Kazlıçeşme will be brought down to just 16 minutes.

Minister Yıldırım also addressed concerns regarding the undersea tunnel's safety in the case of an earthquake. Explaining that they worked closely with earthquake specialists and the Kandilli Observatory, Yıldırım assured that they have taken all precautionary measures in the construction and the tunnel was built to withstand an earthquake of up to 7.5 magnitude. In addition, in the case of accidents or other disasters such as fires, Marmaray's security level is top grade said Yıldırım, explaining that an automatic railway control center as well as the Kandilli Observatory will be tracking all developments that could disrupt Marmaray's functionality.

With the opening of the Marmaray rail system, Istanbul will never be the same says Yıldırım adding that the 'Project of the Century' will soon be accompanied by sister projects including a speed train, new metro lines, the third bridge and a Eurasia tunnel which will allow for the undersea passage of passenger cars.

This is a translation of an article originally written by Mahmut Övür.