Democracy is also a necessity for the arts 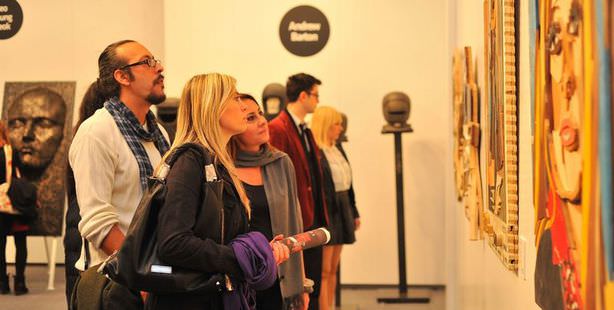 According to Contemporary Istanbul General Coordinator Prof. Dr. Kahraman, growth in the arts will give momentum to its spreading throughout the nation’s baseline. “At this rate, the art market will multiply by four in the next decade,” says Kahraman.

Contemporary Istanbul, which is the eighth international contemporary arts fair hosted by the city, comes to a close on Sunday. The fair, which opened its doors on November 7, has on exhibit over 3,000 pieces of contemporary art by 650 artists. Commenting on the fair, which provides a unique opportunity for observation of the art world in Turkey as well as throughout the globe, General Coordinator Prof. Dr. Hasan Bülent Kahraman stated, "Anyone who has just a little interest in the arts should visit this fair not once, but numerous times." According to Kahraman, investments in arts have not suffered since the Great Depression of 1929.

THE MARKET TO GROW BY FOUR TIMES

Explaining that the situation regarding the arts is a little different in Turkey, which has comparatively been more affected by crises, Kahraman stated, "Yet still, the expansion in the art market is noteworthy. The market size in Turkey is just 65 out of 1,000 in the globe. While just eight years ago, the market was at the 100 million dollar level, today we are talking about a volume nearing 400 million. The annual per capita national income reaching the 10,000 dollar level has also been influential."

Prof. Kahraman offered an evaluation of the direction Turkey's art market will take in the next decade by stating, "Art spending in Turkey is above the average revenue at the 20,000 dollar level. This means that when per capita income reaches 25,000, the market stands to multiply by four."

A total 17,000 art lovers have visited Contemporary Istanbul on its preview day and since its opening. Twenty-two percent of the over 3,000 pieces on exhibit at the fair, the main sponsors of which are Akbank Private Banking, have been given new owners. This rate represents a 20 percent increase compared to sales in 2012. The total value of the pieces on display at the fair have are a combined 180 million liras.

THE MARKET NEEDS TO BREAK FREE FROM THE CAPITAL SPIRAL

Prof. Dr. Kahraman says that the art market needs to break out of its current constraints of solely being a draw for capital owners. Expressing his belief that democracy needs a presence in every area, Kahraman stated, "I have no objection to large collections and the establishment of museums to house them. Turkey has a nostalgia for this. However, there is another issue I tend to focus on in this regard and that is that I believe the arts also need to be democratized. There needs to be an expansion of art collectors."

Prof. Dr. Hasan Bülent Kahraman, brings up the example of London to explain that the way to expanding the arts throughout the baseline is through smaller valued collections and not through major purchases. Mentioning that every October an 'Affordable Art Fair' is held in London, Kahraman stated, "This is a fair which has pieces up for sale at accessible prices. There are art works on exhibition that span between 100 and 10,000 dollars. I feel that in addition to the major purchases made at fairs and in the art market, these sorts of "accessible" prices should also be supported."

Prof. Dr. Kahraman, who currently serves as Assistant Rector for Kadir Has University and is considered to be one of Turkey's leading art critics, says that observing and purchasing works of art is not any different than reading a book. "There needs to be policies geared towards increasing the presence of new collectors as well as the supply of art pieces that are at a purchasable level," stated Kahraman.

This is a translation of an article originally written by Handan Bayındır.