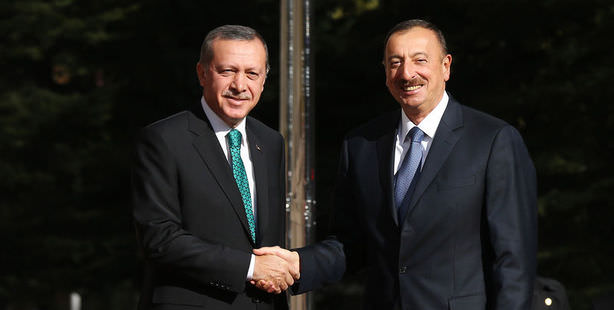 Prime Minister Erdoğan has announced a starting date for the highly anticipated Trans-Anatolian Pipeline project, which will transport Azerbaijani gas to Europe via Turkey. “We will be laying the foundation for the TANAP pipeline in the beginning of 2014,” stated Erdoğan.

Prime Minister Recep Tayyip Erdoğan announced on Wednesday that the foundation for the Trans-Anatolian Pipeline (TANAP), which will transport gas to Europe via Turkey, will be laid at the start of 2014.

Speaking at a joint press conference with Azerbaijani President İlham Aliyev after attending a High Level Strategic Council Meeting, Erdoğan stated that Turkey and Azerbaijan will work together to boost bilateral trade up from the current level of $4.2 billion to $15 billion by 2020 and explained that in addition to discussing the TANAP pipeline they also ventured on what sort of collaborations they could embark on to distribute Azerbaijani gas to the Balkan states. "We have the potential to make investments on supplying Azerbaijani gas to the Balkans and we will be working on these types of plans," said Erdoğan adding, "We also discussed establishing a pipeline between Iğdır and Nakhchivan as well as a railway to run between the cities, both which are projects we will begin working on," stated Erdoğan.

The Trans-Anatolian Pipeline aims to deliver petrol produced in the second stage of the Shah Deniz gas field as well as other fields in Azerbaijan to Europe via Turkey. The entrance point will be the Türkgözu border and the gas will be transported to Europe from Turkey's borders with Greece and Bulgaria. The projected capacity of the line is around 16 billion cubic meters of natural gas annually as of 2020. Turkey is expected to consume six billion cubic meters, while the rest will be sent to Europe.

Prime Minister Erdoğan also announced that he had good news to deliver from the talks with Aliyev and stated that the Azerbaijani President has softened his stance on eliminating visa requirements and aims to initially facilitate businessmen and academics.

Workers in Azerbaijan are also the recipients of good news, announced Erdoğan, explaining, "Up until now the work permit fees for Turkish workers entering Azerbaijan was $1,270. We opened the issue to discussion and they offered to bring the fee down to just $50."

Prime Minister Erdoğan expressed Turkey's solidarity on the Upper Karabakh issue during Wednesday's press conference by stating, "The Upper Karabakh situation is an issue for Turkey just as much as it is an issue for Azerbaijan. This is an issue of vital importance for us when it comes to peace, fraternity and stability in the Caucasus. We cannot push this situation aside. We will continue to offer unconditional support for Azerbaijan to reach a solution to the issue through peaceful means. In this case, the Minsk Group, the U.S., Russia and France, must show rigorous determination." Prime Minister Erdoğan also shared that he and Aliyev discussed amongst themselves ways to ensure permanent and comprehensive peace in the region.