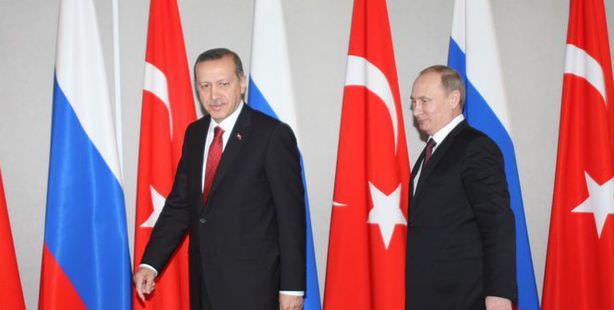 Prime Minister Erdoğan announced that they have established a goal of bringing trade volume with Russia up to $100 billion in 2020, while Russian President Putin requested tax incentives for the Akkuyu plant.

Prime Minister Recep Tayyip Erdoğan and Russian President Vladimir Putin convened at the Turkey-Russia High Level Cooperation Council held in St. Petersburg on Friday. Erdoğan announced that they have established a goal of increasing trade volume with Russia up to $100 billion by 2020. Both nation leaders also agreed to support one another as Izmir and Yekaterinburg compete to host EXPO 2020, with Putin telling reporters, "After Yekaterinburg, there couldn't be a better candidate than Izmir."

Prime Minister Erdoğan told reporters that they have set a trade volume goal between Turkey and Russia at $100 billion in 2020 and stated, "Last year trade volume between Turkey and Russia was at $35 billion, and there was a slight drop in trade volume in the first nine months of the year. However, we have set a $100 billion trade volume goal for 2020." Erdoğan praised Turkish contractor firms in Russia, their investments of which have reached $50 billion, he said adding that they are especially pleased with the contributions Turkish firms have made in the preparations for the Sochi Winter Olympics and the St. Petersburg Airport.

Erdoğan also announced that nearly four million Russian tourists visited Turkey in 2012 and shared plans to open a Russian Federation Cultural Center in Ankara and a Yunus Emre Cultural Center in Moscow. "We our building our first nuclear power plant with Russia, which is a $20 billion investment. Our primary partner in the area of energy is Russia. Another significant step taken during the meeting involved the joint manufacturing of automotives.

THE TWO LEADERS AGREED TO MUTUAL SUPPORT FOR EXPO 2020

During the Putin-Erdoğan meeting, the decision was reached to support whichever city, Izmir or Yekaterinburg, is selected to host EXPO 2012. When asked to comment on the rivalry between the cities, Putin stated, "Of course, the best choice would be Yekaterinburg, however if it isn't held there then it should be held in Izmir, there is no other candidate city that could be better.

Russian President Putin reminded that their largest investment projects with Turkey have been in the area of energy and expressed that he had a request in connection to the Akkuyu project. "Our cooperation in this area has reached a strategic level. Both the Blue Stream and the Akkaya Nuclear Power Plants hold high important in the energy arena. Rosatom will be building Turkey's first nuclear power plant. The total investment value is expected to reach $20 billion," stated Putin. Adding that Turkish firms will be taking on 25% of the work in building the Akkuyu plan, Putin stated, "We are hoping that the Turkish government will provide tax conveniences on this project." Both nations also reached an agreement to initiate a project on the joint production of automotives.