Bodrum is locked and sealed 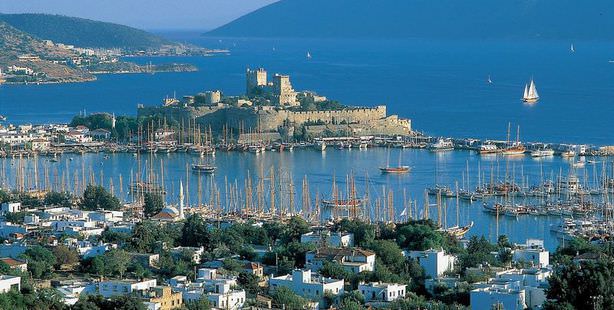 The popular tourism destination of Bodrum will soon be rid of all illegal buildings as a new wave of inspections reveals the vast number of unlicensed structures that has dominated the popular touristic coastal Aegean district. While 33 buildings were locked and sealed by authorities in Cennet Koyu, 320 buildings are to be demolished in Güvercinlik alone.

Three months ago, Prime Minister Recep Tayyip Erdoğan toured the popular tourism destination region of Bodrum in disguise, only to return with orders for all of the illegal buildings in the region's various districts located on Turkey's southwestern Aegean coast to be demolished.

Soon after, the Ministry of Environment and Urban Planning designated a very special team to spend the next three months inspecting the region for illegal structures, resulting in the locking and sealing of multiple buildings as well as the decision to demolish many others. During this time, 33 structures in Cennet Koyu (Paradise Bay), located in Bodrum's Göltürkbükü municipality were locked and sealed in accordance to the district zoning law. In addition, the Göltürkbükü Municipality also issued an administrative fine on the owners of the 33 buildings. Demolition has already begun on the illegal sections of a building located in the same vicinity. An additional 22 buildings which had licensing discrepancies, have now been licensed. The ministry and the municipality have also issued a ruling to demolish ten other buildings deemed illegal.

Güvercinlik Köyü is currently faced with demolition rulings for a total 320 structures, while in Torba 15 buildings, seven of which were hotels, have been locked and sealed. Three buildings in Torba are also pending demolition.

Following Prime Minister Erdoğan's inspection of the region in the summer months, the Ministry of Environment and Urban Planning immediately jumped on board by assigning a special team to take a closer look at Bodrum's coastal properties. Officials spent three months inspecting the shore edge lines along Bodrum's coast as well as looking into all licensing and checking for illegal additional levels, the findings of which they presented to Environment and Urban Planning Minister Erdoğan Bayraktar.

The ministry collaborated with district municipalities on inspections of all illegal structures in Bodrum's bays, which has for the most been completed. Once the inspections neared completion, all owners of illegal properties were issued 'demolition' notices. The ministry did however grant time for owners of illegal structures to proceed with their property's demolition. After the hunt down for illegal properties commenced in Bodrum, other provinces with coastal shores also joined in the hunt. Inspections have even begun on property lining the Bosphorus Strait in Istanbul, and a number of illegal entertainment venues have been detected.

As the ministry's inspections near completion in Bodrum, it appears a vast majority of demolitions will be taking place in Güvercinlik district. A total 320 structures have been locked and sealed by the Mumcular Municipality, which oversees Güvercinlik. It was decided that every building deemed illegal and unlicensed will be demolished. Inspections of Bodrum's popular Torba district are also nearly completed. The municipality has requested all illegal sections of buildings be torn down and has sealed and locked the buildings in question as well as issued administrative fines. In addition, the municipality has also decided to demolish three hotels in Torba.

MINISTER BAYRAKTAR'S FILE ON MUĞLA IS READY AND WAITING

Prime Minister Recep Tayyip Erdoğan heads to Muğla today, during which he is expected to be accompanied by Environment and Urban Planning Minister Erdoğan Bayraktar. In light of the possibility that the Prime Minister may revisit the issue of illegal buildings in Bodrum and the inspections he requested, Bayraktar will be bringing along with him a detailed file of the inspections conducted in the region over the past three months.

This is a translation of an article originally written by Ahmet Topal.