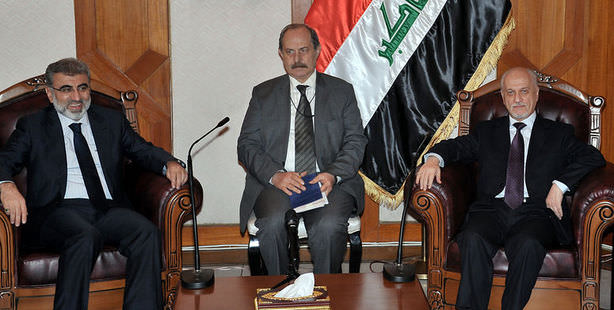 Energy and Natural Resources Minister Taner Yıldız paid a visit to Iraq on Sunday where he met with Iraqi Deputy Prime Minister Hussain al-Shahristani in Baghdad after which he moved on to Erbil, where he will take part in the opening of a three-day energy conference.

Minister of Energy and Natural Resources Taner Yıldız departed for Iraq on Sunday following the resolving of a second plane crisis involving allegations the Baghdad administration had barred Baghdad's airfield for private planes from Turkey. On Friday, allegations had surfaced that private planes from Turkey would be stopped from arriving to Erbil however, the claims were refuted by authorities and Energy Minister Yıldız both arrived to Baghdad on Sunday and departed the same day for Erbil to attend a three-day energy conference. Last year, the central administration in Baghdad denied landing permission for a plane transporting Yıldız to Erbil, citing that the required documents for the plane's landing had not been acquired.

In Baghdad on Sunday, Taner Yıldız had the opportunity to meet with Iraqi Prime Minister Nouri al-Maliki's Deputy Prime Minister for energy Hussain al-Shahristani. In an announcement to the press following the closed meeting, Shahristani stated that they discussed cooperation between the two nations in a "brotherly and transparent" manner and announced that the two agreed that the Baghdad administration's approval is necessary for any oil exports in Iraq.

Minister Yıldız later moved on to Erbil where he will meet with the Prime Minister of the Iraqi Kurdish Regional Administration Nechirvan Barzani and is expected to join Natural Resources Minister Ashti Hawrami to take part in the opening ceremony for the three-day Kurdistan-Iraq Petrol and Gas Conference.

Speaking from Erbil, Yıldız told reporters that Turkey has absolutely no unresolved issues with the Baghdad administration and inferred that quite the contrary there have been significantly positive developments, on which he stated, he will be releasing a detailed announcement soon.