THY unveils new campaign and "Kobe vs. Messi: Shootout" commercial 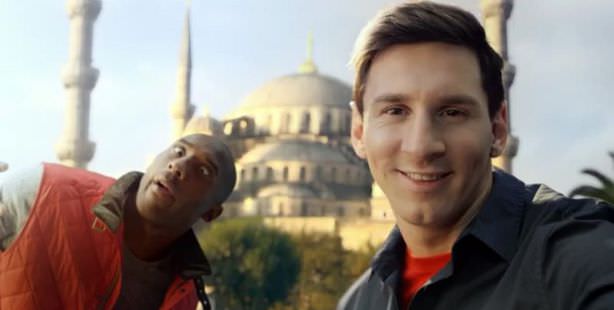 Turkish Airlines (THY) released its latest commercial "Kobe vs. Messi: Shootout", which is the second installation of a blockbuster commercial series featuring brand ambassadors and international sports megastars Kobe Bryant and Lionel Messi, as well as introduced a brand new ad campaign entitled "Widen Your World" on Tuesday. THY's previous ad starring, "Kobe vs. Messi: Legends on Board", broke a viewing record on YouTube as the highest viewed commercial with over 105 million hits.

The commercial highlights the airline's expansive global network as basketball mega star Kobe Bryant and football legend Lionel Messi resume their friendly rivalry through sending one another 'selfies' as they travel to a series of exotic destinations served by Turkish Airlines, including the Red Square in Moscow; The Great Wall of China; the Maldives; Bangkok; and Mount Kilimanjaro. The international sports megastars are seen consulting the airline's destination boards for flights to locations all over the world, where they then take photographs of themselves and send them to one another. The ad's final scene is of Messi taking yet another 'selfie' in Sultanahmet Square, however this time, the footballer is 'photobombed' by basketballer Bryant in the background.

The new "Widen Your World" ad campaign commercial "Kobe vs. Messi: Shootout" was screened at a press conference on Tuesday held in California's Manhattan Beach Marriot attended by Los Angeles Lakers star Kobe Bryant and Turkish Airlines executives. "We are excited to continue our relationship with Kobe Bryant and Lionel Messi to heighten awareness of the many benefits of Turkish Airlines around the world, such as our award-winning cuisine, wide global network and unsurpassed service," stated Turkish Airlines Chief Marketing Officer Faruk Cizmecioglu, adding "Just as these two men are at the top of their games, so too is Turkish Airlines, which now travels to 241 global destinations and counting."

Turkish Airlines, which offers the world's most comprehensive network and was selected as "Best Airline in Europe" for the third year running in 2013, set a precedent with their previous ad campaign "Globally Yours" and commercial "Kobe vs. Messi: Legends on Board", which, estimated to be viewed more than 105 million times, makes it the highest viewed commercial in YouTube's history.

Two-hundred people took part in the filming of Turkish Airlines newest commercial, "Kobe vs. Messi: Shootout", which was jointly produced by Crispin Porter + Bogusky's. This newest commercial, which aims to break the previously set viewing record, is being broadcasted in 20 different languages and in over 170 nations. This sequel to the original, "Kobe vs. Messi: Legends on Board", once against pits Messi and Bryant in competition, this time however with 'selfies' sent from a series of exotic Turkish Airlines destinations all over the world. Messi kicks off the challenge by taking a photograph of himself in front of St Basil's Cathedral in Moscow's Red Square, which he sends to Bryan's phone with the message "It's on." Bryant returns the favor from the Great Wall of China. Messi then sends a photo of himself snorkeling with fish in the Maldives as Kobe sends an underwater 'selfie' from Cape Town with a shark in the screen. Messi is then photographed with a cute monkey in Thailand, as Kobe shares a photo of him being licked by a lion. The destination race concludes with the two stars unsuspectingly meeting up in Istanbul as Messi is 'photobombed' by Bryant while taking a 'selfie' in front of Sultanahmet Mosque.