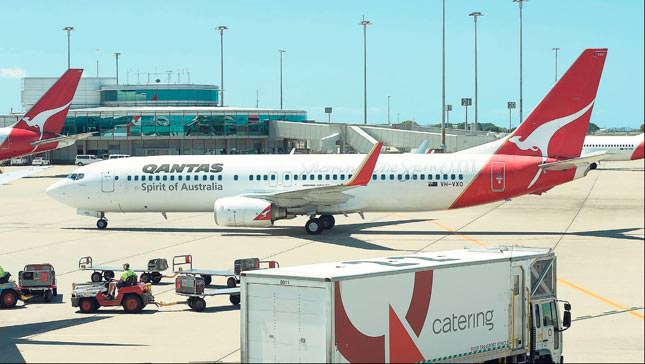 Australia's Qantas is to cut 5,000 jobs in a $ 1.8 billion cost-cutting move after posting a loss during 2013's last six months. The airline also plans to cut its fleet by 50 aircraft including eight A380s on order

Australia's Qantas is to cut 5,000 jobs in a $ 1.8 billion cost-cutting move after posting a half-year loss for the six months to December.

The airline also plans to cut its fleet by more than 50 aircraft Struggling Australian carrier Qantas yesterday said it will axe 5,000 jobs, defer aircraft deliveries and suspend growth at its Asian offshoot Jetstar in a major shake-up after deep first-half losses, warning of more pain to come.

The airline, battling record fuel costs and fierce competition from subsidized rivals, posted an interim net loss of AUD $235 million ($210 million) in the six months to Dec. 31 as it faces some of its toughest conditions ever. Underlying loss before tax -the airline's preferred measure of financial performance- came in at $ 225 million, a figure chief executive Alan Joyce called "unacceptable and unsustainable."

"Hard decisions will be necessary to overcome the challenges we face and build a stronger business," said Joyce, who will take a 36 percent wage cut as the company works to slash costs by $ 1.8 billion over three years. Part of the restructure will see 5,000 full-time positions lost from the carrier's 32,000-strong workforce by 2017 with a wage freeze across the network until the airline returns to profit.

"I regret the need for these wide-ranging job losses, but we will do everything we can to make the process easier for employees who leave the business. At the end of this transformation, Qantas will remain an employer of more than 27,000 people, the vast majority based in Australia and we will be a better and more competitive company," Joyce said.

Australia's opposition Labor Party called it "the worst day for aviation since the collapse of Ansett," referring to the former Australian airline that went under in 2001, while unions said workers were being punished for poor management. "Qantas management has outlined a demolition job, but failed to follow through with a strategy for how it will grow the business and serve the national interest," said Nathan Safe, president of the influential Australian and International Pilots Association.

The carrier flagged "significant changes" to its fleet plans and network and a reduction in capital expenditure of AUD $1 billion across the next two fiscal years. This will see the selling or deferred delivery of 50 aircraft, including the eight remaining Airbus A380s it has on order.

Following an interim profit warning in December, Moody's and S&P both downgraded Qantas' credit rating to "junk" status, increasing its financing costs and restricting access for investors who do not put their money in lower-rated companies. Qantas has since been working to convince the government it deserves a debt guarantee, while lobbying Canberra to relax the Qantas Sale Act which limits foreign ownership in the airline to 49 percent.

Joyce argues that the cap, which restricts access to capital, is hurting Qantas' ability to compete, particularly against domestic rival Virgin Australia - majority-owned by state-backed Singapore Airlines, Air New Zealand and Etihad. Australia's conservative government said this week it was drafting laws to allow Qantas to be majority foreign-controlled and for a single foreign shareholder to own more than 25 percent.

But the legislation is unlikely to pass through the upper house with Labor Party and the Green Party opposing majority overseas ownership, while remaining open to an assistance package. Joyce warned of more difficult decisions ahead. "We must defer growth and cut back where we can, so that we can invest where we need to.

We have already made tough decisions and nobody should doubt that there are more ahead," he said. Qantas shares were more than seven percent lower at AUD $1.17 in early afternoon trade.