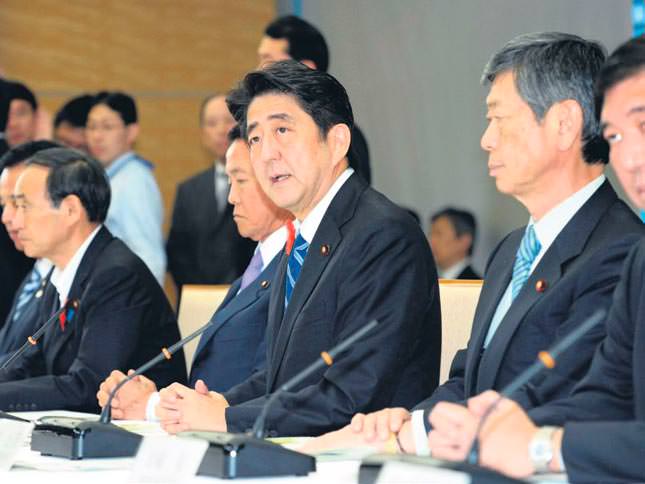 by reuters Mar 08, 2014 12:00 am
Tokyo - Japan is expected to log a record current account deficit in January and any rebound in core machinery orders is thought likely to be modest, a Reuters poll of economists has found, pointing to a subdued economic outlook.

Economic growth for October-December is expected to remain unchanged from an initial estimate of 0.3 percent, but poll respondents believe capital spending may be revised down slightly, with firms apprehensive about the impact of a sales tax hike on April 1. Monday's current account data is thought likely to underscore a sluggish recovery in exports due to slack overseas demand, while fuel import costs will be kept high by the weak yen. The current account is expected to show a deficit of 1.41 trillion yen ($13.7 billion) in January, the survey of 26 economists found, following a deficit of 638.6 billion yen in December. "It is hard to expect a clear improvement in the current account balance as imports are likely to stay high until the sales tax hike," economists at Dai-Ichi Life Research Institute said.

There are growing worries Prime Minister Shinzo Abe's initially-successful aggressive stimulus drive and ultra-easy monetary policy to help buoy the economy may be losing momentum.Core machinery orders, a leading indicator of capital spending, are believed likely to have rebounded 7.0 percent in January, the poll showed, but the gains are not seen strong enough to offset the record fall of 15.7 percent in December. Compared with a year earlier, core machinery orders, a highly volatile data series, are expected to have risen 18.8 percent in January after a 6.7 percent increase in December. Core machinery orders data will be released at 8:50 a.m. on Thursday (2350 GMT Wednesday). The poll estimated that the world's third-largest economy probably grew 0.3 percent in the final quarter of last year, unchanged from preliminary data.

Capital expenditure, however, was expected to show only 0.8 percent growth in the quarter, slower than the 1.3 percent gain listed in the initial estimate. "Corporations remain careful about their capital spending on uncertainty over the economic outlook after the sales tax hike, and there is caution about overseas economies including emerging nations," Takeshi Minami, chief economist at Norinchukin Research Institute, said in a report. The poll found that the corporate goods price index, which measures the price companies charge each other for goods, was projected to have risen 2.1 percent in February from a year ago -- supporting the Bank
of Japan's 2 percent consumer inflation target.