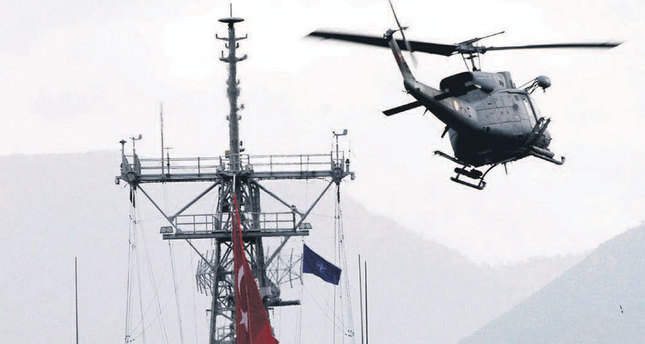 ISTANBUL — "The fourth Doha International Maritime Defence Exhibition and Conference" (DIMDEX) will be held in the Qatari capital from March 25-27. Some 184 participants from 54 countries and 21 warships from 13 countries will be featured at the event. The fair will be organized under the auspices of Qatari Emir Seikh Tamim Bin Hamad Al Thani and hosted by Qatar's Commander of Naval Forces Mohammed Bin Nasser Al Mohannadi. DIMDEX will span two days and be held on a space of 15,000 square meters.

Turkey will be represented at DIMDEX by 25 companies under the coordination of the Undersecretariat of Turkish Defense Industry (SSM). A space of 1,159 square meters has been set aside for Turkish companies. Expenses involved in the fair are being covered by the SSM for the promotion of the defense industry.

Aselsan, Havelsan, Roketsan, Timsan, TÜBİTAK BİLGEM, Meteksan, Middle East Technical University Technocity, Gate, Transvaro, Baykar, Milsoft, Bites and Yakupoğlu are among the Turkish companies participating in DIMDEX. In addition, the TCG Gelibolu frigate, a naval vessel produced in Turkey will also be on display in Doha during the fair. President of Defense and Aerospace Industry Exporters' Union Latif Aral Aliş and Undersecretary of Defense Industry Murad Bayar will attend the fair together and meet with a number of official figures.

A representative of the Turkish defense industry, Otokar is looking to open up to new markets and will promote its world renowned armored vehicles COBRA and ARMA at the International Air and Space Fair (FIDAE) held in Chile from March 25-30. Otokar will introduce its wide product range from 4x4 tactical wheeled vehicles to palletized armored vehicles at the FIDAE 2014 held in Santiago, Chile. Visitors at Otokar's booth will have the opportunity to see COBRA and ARMA 8x8 vehicles from up close.

Serdar Görgüç, general director of Otokar, the biggest private capital industrial company in Turkey, which is interested in entering new markets, states: "Designed and produced in full by Otokar, our vehicles are actively used in nearly 30 countries in five continents. As a national producer, we are proud to represent our country in the area of defense. We primarily renew and broaden our product range all the time in order to meet any needs in the area of land systems in the Turkish Armed Forces. Our army's preference of domestic and national manufacturers like us is an important reference abroad as well. We are gaining strength from that and introducing new products into the markets."