Will the West or Kremlin win in Ukraine? 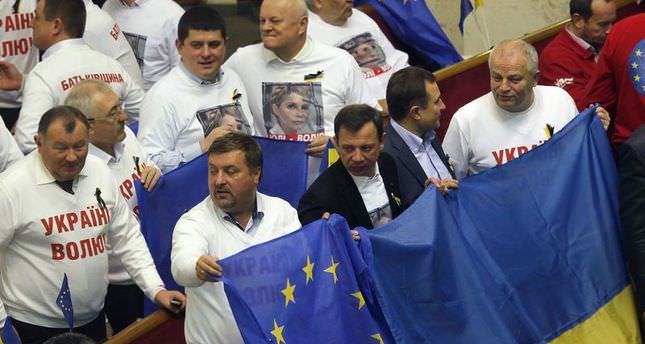 With pro-Westerners in power, the IMF unlocked up to $18 billion bail-out for Ukraine. Ukraine will raise gas prices by 50 percent to secure this deal. Will higher gas prices lead to another counter-revolution again?

ISTANBUL — Ukraine has been some kind of revolution arena of West and Russian Em-pire. After the Soviet Empire fell down, Ukraine became indpendence. But the nation couldn't break ties with Moscow because of its desperate need of gas supply. Up to 40 minus celcius cold air, the Russian gas supply is vital for Ukrainian people. And inevitably, the fact that Russia is main supplier of Ukraine, Moscow has the power to affect the nation's politics. But in 2004, there was a breakdown in Ukraine politics. Pro-Western revolution, known as Orange Revolution happened and then-president Victor Yanukovich got ousted. However as a result of Moscow's heavy pressures over gas supply the Orange Revolution couldn't stand much. And Ukraine's Orange Revolution turned blue in 2010 and Yanukovych became president again. Yanukovych was ousted from power four years later, however, following the February 2014 Euromaidan clashes in Kiev's Independence Square. Unlike the bloodless Orange Revolution, these protests resulted in more than 100 deaths, occurring mostly between February 18 and 20th.
Now everybody wonders who's the next winner of this power struggle?

Yesterday The International Monetary Fund announced a $14-$18 billion bailout for Ukraine to avert bankruptcy for the crisis-hit country amid its escalating standoff with Russia. The agreement in principle, worth the equivalent of 10.8-13.1 billion euros, is tied to tough reform conditions which will have a big impact on the Ukrainian economy and people. The Fund's Ukrainian mission chief Nikolai Georgiyev said the actual size of the "standby agreement" would be determined only once the new Western-backed leaders of Ukraine implemented the reforms the Fund had sought in vain from the cabinet of Kremlin-backed president Viktor Yanukovych.

The Fund has made an immediate end to Ukraine's costly gas subsidies one of its main conditions for the programme's approval. The IMF programme was announced one day af- ter the Ukraine's state energy company Naftogaz said it would increase domestic heating gas prices by 50 percent on May 1. Naftogaz added that rates for district heating compa- nies would go up by 40 percent on July 1 and that further rate increases were likely in the coming years.

But with higher gas prices, there are fears again among pro-Western Ukrainans regarding a new pro-Russian reaction. Ukraine's already poor living standards will get lowered more because of the raises in gas prices. Ukrainians are accustomed to buying gas at heavily subsidised rates. Because Ukraine is heavily dependent on Russian gas, Kremlin-backed Blue Revolution might happen again. Under these circumstances Ukraine has the highest potential to be a war arena again between West and Russia.

On the aother hand the West is also dependent on Russian gas. Russia supplies about 30 percent of Europe's gas. So, there are serious worries on gas supply. Russia provides approximately a quarter of the natural gas consumed in the European Union; approximately 70 percent of those exports travel through pipelines across Ukrainian soil prior to arriving in the EU.
Last Update: Mar 28, 2014 8:19 am
RELATED TOPICS