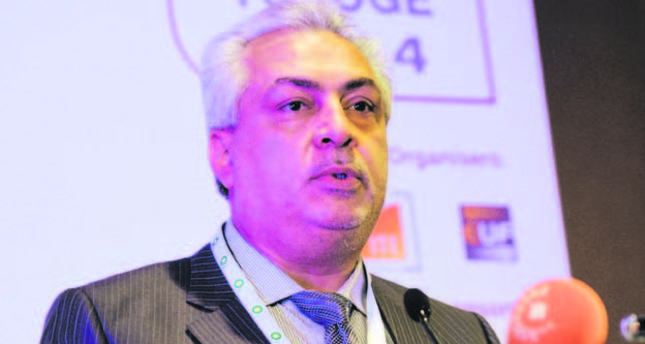 by Mehmet Nayır Apr 09, 2014 12:00 am
ANKARA — Turkey's Energy Minister Taner Yıldız has said for over a year Turkey is planning to export oil extracted from northern Iraq through the Ceyhan Oil Terminal on Turkey's Mediterranean coast.

During that period, the collection of oil revenues between the Iraqi central government in Baghdad and the Kurdistan Regional Government (KRG) was a persistent point of contention as Baghdad sought greater control over the oil trade in northern Iraq. Turkey and the KRG issued a joint statement last week that petrol will be released to international markets even without an agreement between Baghdad and the KRG. Following these developments, Iraq's Oil Minister Abdelkarim al-Luaibipaid a visit to Turkey. Al-Luaibi said recent tension between Turkey and Iraq has been overcome, adding, "Turkey is a strategic partner of Iraq. There are a lot works we will carry out together." Al-Luaibipointed out the energy crisis between Erbil and Bagdad ended after Turkey's move on northern Iraq's petroleum. "The parliamentary council discussed this issue yesterday. I believe they will come to a deal within a few days," al-Luaibi said.

The diplomatic negotiations between Ankara, Baghdad and the KRG have started to bear fruit. As a guest of Yıldız, al-Luaibi participated in the TUROGE Energy Summit in Ankara. He said that there are important steps that have been taken in respect to energy crisis in Erbil.
Al-Luaibi added that the diplomatic crisis between Ankara and Bagdad over the Iraqi government's decision to deny Yıldız's plane access to Iraqi airspace last year was resolved. Al-Luaibi said, "We have a strategic partnership with Turkey for 40 years. We export crude oil through the Ceyhan Oil Terminal. We are also working to establish a natural gas system. The southern Arab countries such as Egypt, Jordan, Syria and Lebanon will be linked with Iraq and Turkey. As a result, these countries will be connected to Europe through Turkey. Turkey is currently doing business worth $25 billion [TL 52.95 billion] in Iraq. This is why I am here today."

As a final remark, al-Luaibi evaluated the current oil transfer through the Kirkuk-Ceyhan Oil Pipeline, adding that oil transfers were halted for five weeks. because of terrorist attacks.