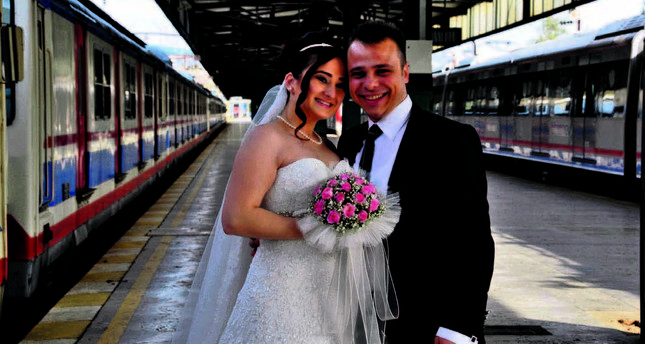 With the spread of Turkey's cultural and scenic treasures far and wide through soaps operas, many foreign couples are choosing to tie the knot in Istanbul

ISTANBUL — Istanbul hosts more than 15 percent of all weddings in Turkey. Recently, many couples from Arab countries, India, Iran, Russia, Azerbaijan and Europe said "yes" at the beat of a heart of Turkey.

According to data from the Turkish Statistical Institution (TurkStat), 600,138 couples got married in Turkey last year, more than 15 percent in Istanbul.

Istanbul is one of the cities that host the highest number of weddings in the world, which also include Las Vegas and Paris and cities in Italy and Greece.

From furniture to white goods, furnishings to homes, organization equipment to jewelry, wedding gowns to wedding catering, music to wedding desserts and invitations, the wedding sector in Turkey rakes in millions of dollars, costing each couple an estimated $23,000 (TL 50,000). According to data from the Association for Prearrangement and Implementation of Creative Activities (YEPUD), wedding organizing brings in between $250-$450 million in Turkey. The industry is worth $170 billion worldwide. The wedding economy has rapidly grown in Turkey in the last 15 years as foreigners started to plan Istanbul as the site for their weddings. Pool weddings were very popular in the past, but today many get married in parks, historical places and five star hotels. Today, foreigners who come to Turkey for weddings prefer mainly palaces, mansions and five star hotels. Historical places along the Bosporus are the most popular while other coastal towns also attract couples.

Being a wedding center is not just about choosing the right place. Istanbul is joining the likes of Milan and Barcelona in terms of legendary wedding shopping. Many come to Istanbul to choose their dresses, accessories, and decorations.

Weddings remarkably contribute to the economy in the areas of transport, accommodation, tourism agencies, car rentals, retail and catering. Wedding guests who pour into the city often go on tours together, further boosting the economy. Foreigners who prefer Istanbul, Cappadocia, Bodrum, Marmaris, Fethiye and Antalya are usually middle and upper class.

The general director of the wedding planning website dugun.com, Emek Kırbıyık, noted 2 million tourists came to Istanbul, up 30 percent in the first quarter of the year. "This shows that Istanbul has a rising value globally, which directly increases the number of couples who want to get married in Istanbul," he said. Kırbıyık noted apart from the location and planning, wedding gowns also attract demand from foreigners. Additionally, outfits for henna nights, bridal shoes and jewelry also make the top of the list.

An estimated 1,000 foreigners get married in Turkey annually. The wedding of a foreign couple in Turkey means 150 to 600 people will spend money in Turkey for three days and nights. When it is taken into consideration that the guests have a certain level of economic power, Turkey can obtain significant income from wedding tourism.

A tourist who comes to Turkey for a wedding spends five times more than a regular tourist.