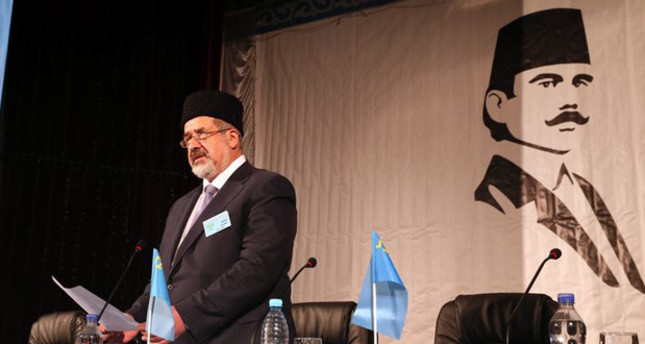 by AA May 05, 2014 12:00 am
SIMFEROPOL, Ukraine — A senior state official in the breakaway Ukrainian region of Crimea has threatened to shut down the peninsula's Crimean Tatar parliament.

Prosecutor general of the Republic of Crimea, Natalia Poklonskaya, started an investigation into the Tatar body on Monday citing "illegal mass activities" by Crimean Tatars after leader and MP Mustafa Dzhemilev Kırımoğlu was denied entry to Russia on Friday.

"On Saturday, May 2, members of the National Assembly of the Crimean Tatar People chaired by Refat Abdurakhmanovich Chubarov were engaged in radical and illegal mass activities in Crimea's Armyansk and other parts of the peninsula, including mass civil disobedience, road closures, illegally crossing the Russian Federation border, hindrance of lawful work of government agencies, and violence," claimed Poklonskaya on Monday.

Poklonskaya, who was appointed by Russia to Crimea after the latter declared its independence from Ukraine in March, warned that the National Assembly would be shut down "unless Chubarov and Crimean Tatars ended their radical activities."

As the prosecutor general read out her warning at the Assembly in Russian, Chubarov responded that on April 11 Crimean Tatar was recognized as an official language of the region, along with Russian and Ukrainian, and asked Poklonskaya to read the warning in the minority tongue.

Poklonskaya ignored this request prompting Chubarov to describe the procedure as a breach of his constitutional rights.

Dzhemilev was denied entry to Crimea

On Saturday, Crimean Tatar leader Mustafa Dzhemilev (Kırımoğlu) was denied entry to Russia at Moscow airport on a transfer from Crimea to Germany. Crimean Tatars chanted slogans at the region's northern Armyansk checkpoint in protest.

The Russian authorities had informed Kırımoğlu that he was not barred from entering the country despite claims to the contrary; Qirimoglu said that before his departure from Crimea, border guards told him such a ban was in place.