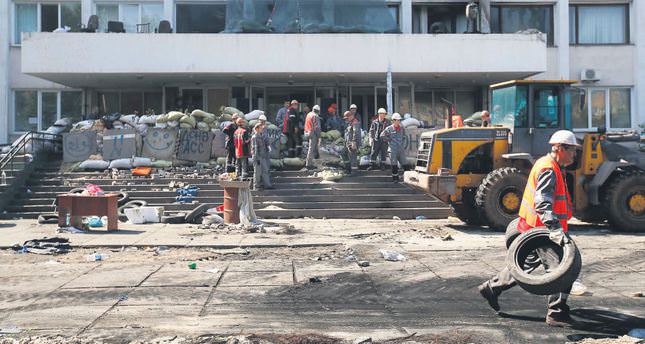 KIEV — Multi-billionaire Rinat Akhmetov's miners and metalworkers joined police on patrol on Mariupol on Wednesday, cleared barricades of tyres and pallets with diggers and heavy loaders and swept the debris from the gutted City Hall, ending the turmoil unleashed by the armed takeover of much of the region. The city seemed to return to normal; police teamed up with the unarmed workmen of Metinvest, the most powerful company in the industrialised east. Though largely symbolic, the scene showed the extent to which the crisis has come to threaten the interests of Ukraine's richest man and the lengths he will go to to protect them.

Akhmetov, whose fortune is estimated by Forbes magazine at $11.4 billion (TL 24 billion), has acquired almost feudal status in the industrial hub of Donetsk in the past 20 years - but the separatist rebellions there have altered the dynamics of power. As pro-Russian rebels declaring independence seized public buildings across the steel and coal belt which is the basis of his colossal fortune, he issued repeated written statements in support of a united Ukraine. But the media-shy 47-yearold Akhmetov, who has a workforce of 300,000 people on his payroll in the Donbass, has to tread carefully around local sensitivities and has avoided specifically condemning the action of the separatists.

The rebels' 'declaration' of an independent Donetsk region on Monday, however, and their appeal for Russian annexation pose a major threat to Akhmetov's holdings and his fortune. With no response from Moscow, the prospect of the Donetsk region joining the likes of Moldova's Transdniestria or Georgia's Abkhazia as largely unrecognised statelets, operating in a legal and diplomatic limbo, can hardly sit well with a business empire built on exports. "No one wants the Donetsk region to become some kind of grey zone unrecognised by the world. That would be very painful for us," said Yuriy Zinchenko, general director of Mariupol's Ilyich Iron and Steel Works, part of Metinvest, majorityowned by Akhmetov's System Capital Management.

Metinvest supplies more than 100 countries, he told Reuters, and export routes could be threatened if decisions about the future of the east were taken outside the law. "That's clear not just to us, to our group, its leadership and individual companies, but to the workers too," he said. "That's more 300,000 employees and their families - that's a huge army." It is an army both the pro-Russian rebels and the government in Kiev would be rash to ignore.

Independent analyst Volodymyr Fesenko said Akhmetov has now recognised that his earlier passive tactics did not work in his favour as the rebellion has continued to grip the region. "He has understood that his tactic of passive neutrality no longer works. He will have to become an active intermediary between separatists and the government,"Fesenko said. Sending unarmed workers from Metinvest, Akhmetov's main metals exports and mining conglomerate, to join patrols with police is not the only sign that the oligarch has decided to take a bolder line to protect the future of his business empire.

Akhmetov, who emerged as head of a private business empire out of violent gang wars in the east in the 1990s after the collapse of the Soviet Union, normally shuns media interviews and public appearances. But in a new departure for him on Wednesday, the usually camera-shy oligarch made a four-minute video for Ukrainian TV channels in which he declared: "I strongly believe that Donbass can be happy only in a united Ukraine".

He threw his weight behind the Kiev government's plan to devolve more powers to the regions to provide greater autonomy and undercut separatist demands which Kiev fears will lead to the break-up of Ukraine. Soccermad, he owns the FC Shakhtar club, with its flying saucer-like stadium and star-studded multinational squad. He made headlines three years ago by buying a $200-million London apartment. But in the violent upheaval of the past five months, the overthrow of his ally, Moscow-backed President Viktor Yanukovich, the shooting dead of more than 100 people in Kiev by police, Russia's annexation of Crimea and now separatist rebellions in the east, have made Akhmetov's wealth and status count for less.

In the capital Kiev, well away from his eastern stronghold and the popularity it assures him of, Akhmetov has always had a chequered reputation because of his past support for Yanukovich. He is a persona non grata on Kiev's Maidan - Independence Square - which was the crucible of the mass action that drove Yanukovich from power and where protesters still hold sway.

Metinvest said its patrols with police would be expanded to other towns where the company has operations. It has urged the army to stay out. Control of Mariupol is key to the fate of the Donetsk region and the ambitions of the separatist gunmen. Thousands of people turned out here on Sunday to cast votes in a referendum on self-rule, many of them saying they sought autonomy but not necessarily divorce from Kiev. A test of how far Kiev still holds sway here will come on May 25, when it tries to hold a nationwide presidential election and draw a line under months of turmoil. As things stand, the vote will go ahead in Mariupol, with Akhmetov's apparent consent. Both sides are courting him. But Metal baron Sergei Taruta, the Kiev-appointed governor of the Donetsk region, said Akhmetov was not on the rebels' side: "You can see what role he's playing by what's going on in Mariupol. His workers are fighting against what's happening there."
RELATED TOPICS