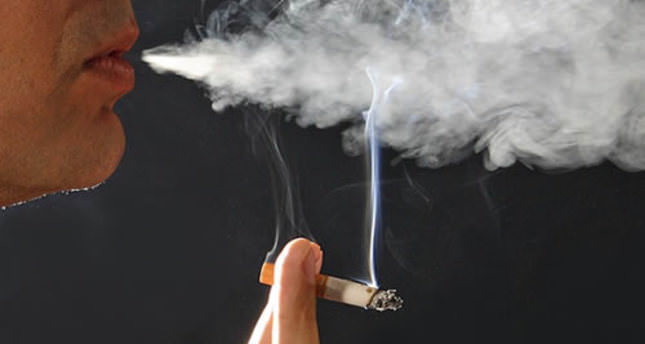 by AA Jul 15, 2014 12:00 am
Smoking rates in Turkey have dropped dramatically over the last five years while tax revenue from tobacco has doubled, government figures have revealed. The change is in line with the taxation policy promoted by the World Health Organization (WHO) as the most effective tool in the fight against smoking.

The organization claims a 10 percent rise in tobacco prices reduces consumption by about four percent in high income countries and by up to eight percent in low and middle income countries. The country's annual consumption of cigarettes fell by 15 percent between 2008 and 2013, according to figures collected from the Turkish Tobacco and Alcohol Regulatory Authority (TAPDK) database. This decrease could be explained through the introduction of a smoking ban in closed areas coupled with tax rises which almost doubled during this time. From May this year, taxes made up nearly 82 percent of the retail price of a box of cigarettes, making Turkey the eighth highest taxer of tobacco in Europe. Tax revenue from tobacco products rose to $10.2 billion last year, compared to $5.2 billion (TL110 billion) in 2008.

The 2013 WHO's Global Adult Tobacco Survey report shows the number of people smoking in Turkey fell to 14.8 million in 2012 - 1.2 million fewer smokers than in 2008. Heart disease, strokes and cancer are the three biggest killers in Turkey, according to data released in April this year by the Turkish Statistical Institute. In the Center for Disease Control and Prevention Report on May 30, it indicates that the number of smokers in Turkey has dropped from 30.1 percent in 2008 to 25.7 in 2012, resulting in the saving of an estimated 400,000 lives among the current and would-be smokers while making Turkey one of the leading countries at preventing tobacco-related deaths.

"Cardiovascular disease is the main cause of death in Turkey and cancer comes second," Professor Murat Tuncer, chancellor of Hacettepe University said. "Turkey has a young population and cancer related deaths are lower in the country, apart from smoking-related cancers," he added. In 2012, Faruk Çelik, Minister of Work and Social Security announced that the health cost of tobacco products reached $1.5 billion - 9 percent of the country's overall health expenditure. A harsh tax policy is deemed as the most effective tool by experts in discouraging young people from smoking, which will have long-term benefits as most smokers take up the habit as teenagers.
Last Update: Jul 15, 2014 1:26 pm
RELATED TOPICS