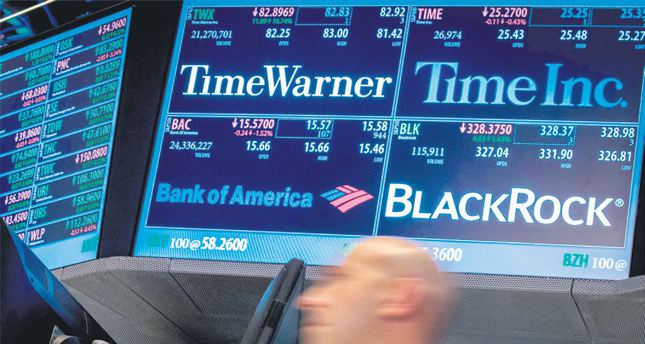 Rupert Murdoch's 21st Century Fox Inc said on Wednesday it had offered to buy Time Warner Inc, a move that would unite two of the world's most powerful media conglomerates, but Time Warner rebuffed its offer.

Time Warner's stock jumped after news that Murdoch had his sights on Time Warner, the owner of the Warner Bros. movie studio and cable channels such as HBO and CNN, among other media properties. Murdoch's cash-and-stock bid was worth about $80 billion (TL 170 billion), people familiar with the matter told Reuters earlier on Wednesday. In disclosing the rejected bid Wednesday, Time Warner and Fox indicated that their talks were over, but analysts don't expect Murdoch to give up. To clinch a deal to buy Time Warner Inc, Rupert Murdoch's Twenty-First Century Fox Inc will not only need to raise the value of its bid above $80 billion but also boost its ratio of cash to stock, investors said on Wednesday.

A number of Time Warner shareholders said Fox and Murdoch, its Chairman and Chief Executive, may have to raise the bid to as much as $95 a share and boost its cash component to wrap up a merger. Time Warner said it rejected Murdoch's unsolicited offer, of which 60 percent would be Twenty-First Century Fox stock and 40 percent cash, a far-reaching proposal that would reshape the media landscape.

Another executive at one of Time Warner's large institutional shareholders also said he would look for Murdoch to offer a higher ratio of cash to firm up the value of the deal. Prospects for gains in Fox stock in the near term could be constrained by the difficulties of merging the two businesses, including wringing out cost savings, and the effect of the likely debt burden Fox assume after borrowing billions of dollars. Time Warner shares rose 17 percent to $83.13 in trading on Wednesday after the company disclosed the offer and its rejection. Including the assumption of Time Warner debt, the deal would have been worth $94.3 billion, according to Thomson Reuters data. Twenty-First Century Fox shares fell 6 percent to $33. Time Warner said the strength of its own strategy and "significant risk and uncertainty as to the valuation" of Fox's stock were reasons for rejecting the bid. It also noted the stock did not have voting rights, a type of share that typically trades at a discount.

Mitch Zacks, portfolio manager and principal of Zacks Investment Management of Chicago, said Time Warner's board may have rejected the offer as a bargaining tactic. "My guess is that if the offer goes to about $95 per share, the board would have a hard time turning it down," he said.
On the other hand, If Rupert Murdoch succeeds in buying Time Warner Inc and CNN is put up for sale, the 24-hour cable news network could be worth $5 billion, according to one analyst's estimate. Gabelli & Co's Brett Harriss said CNN is worth about 11 times annual estimated earnings before interest, taxes, depreciation and amortization (EBITDA) of $450 million. He based the valuation on recent media deals such as Discovery Communications Inc's purchase of a controlling interest in Eurosport International and AMC Networks Inc's acquisition of Chellomedia. Both transactions were valued at 10.5 times to 11 times EBITDA, Harriss said. Fox has indicated it would sell Time Warner's CNN, a direct competitor of Fox News, to clear any regulatory hurdles, according to people familiar with the situation. Time Warner, which also owns pay-TV channel HBO and the Warner Bros movie studio, does not break out financial data for CNN. CBS Corp is another possible suitor, according to people familiar with the broadcast network.Founded in 1980 by media mogul Ted Turner, CNN was the first cable news network in the United States and now has more than 40 news bureaus across the globe, with distribution in more than 200 countries. But CNN is struggling with declining ratings and advertising revenue as competition - especially from Fox News and Comcast Corp's MSNBC - gained ground. According to Associated Press, even though Rupert Murdoch's bid for rival media giant Time Warner has been rejected, that doesn't mean how you watch TV shows and movies will stop changing any time soon. The cash-and-stock bid by Murdoch's Twenty-First Century Fox was partly meant to counter consolidation among TV distributors like Comcast-Time Warner Cable and AT&TDirecTV.

The more must-have channels like HBO and Fox News Channel are assembled under one company, the stronger that company's bargaining position in demanding licensing fees from the TV distributors, no matter how big they get. Time Warner also owns TV channels CNN, TNT and TBS, along with the Warner Bros. movie studio, which includes Batman, Superman and Harry Potter. Fox owns the 20th Century Fox movie studio, the Fox broadcast network and such TV channels as Fox News and FX. Much of the value is in the television channels because of the everincreasing fees they are able to command from cable and satellite TV providers. Disputes over such fees have led to temporary blackouts of popular channels from various systems. A combination could accelerate the industry's "TV Everywhere" push, in which traditional media companies make their channels available over the internet as part of a TV subscription. It's the pay TV industry's answer to the rise of streaming services such as Netflix, YouTube and Amazon. The hang-up in making those channels available online has partly been licensing deals with content producers. A unified company with an even larger suite of channels from TBS to FX could make such deals standard industrywide.
Last Update: Jul 18, 2014 12:10 pm
RELATED TOPICS