Turkish businessmen to takeover B20 leadership 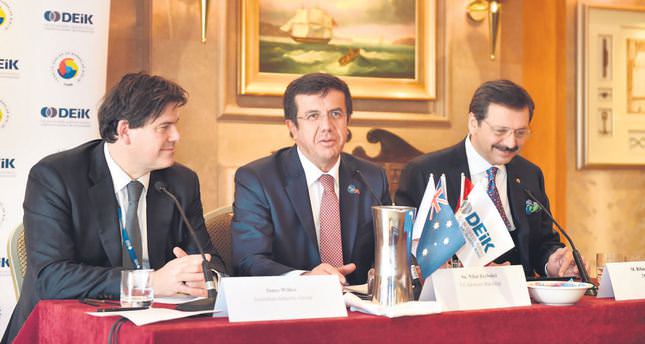 Businessmen, the economy minister in Sydney for the G20 business summit during which an FTA between Turkey and Australia was on the agenda

Rifat Hisarcıklıoğlu, the chairman of the Turkish Union of Chambers and Commodity Exchanges, traveled to Australia to attend the B20 (Business 20) summit. The expectations of the global business world from G20 countries will be discussed and this year's B20 President Richard Goyder will deliver a speech on recent economic developments concerning the business world. Australian Prime Minister Tony Abbott will also be present.

Hisarcıklıoğlu will meet with world business leaders and will start preparations for next year when Turkey will take over the B20 presidency from Australia. Hisarcıklıoğlu also noted that Turkey should benefit as much as it can from the G20 summit and that Turkey leading the B20, which is the business branch of the G20, is a great honor.

He further noted that the G20, which determines various global economic policies, will become more and more important in the current global system where new balances are being established and global financing resources are diminishing.

Turkey to host discussions that will shape the global economic system means it will be under scrutiny. "We have to benefit from this chance. As the president of the G20, Turkey will have the chance to express various issues and resolve global problems in a manner that would be beneficial for Turkey. Next year, everyone that leads the world's economy will visit Turkey. Not only presidents and prime ministers but also heads of central banks, international conglomerates, various bureaucrats will be hosted in our country," said Hisarcıklıoğlu and added that with more than 100 meetings, around 10,000 people leading the global economy will visit Turkey.

Hisarcıklıoğlu added that Turkey and Australia will launch negotiations for a free trade agreement in the near future. The Ministry of Economy Nihat Zeybekçi has announced that the trade volume which was around $800 million (TL 1.7 billion) between Turkey and Australia has increased to $1.7 billion in 2013. Zeybekçi attended the Turkish-Australian Business Forum in Australia during his visit to Sydney for the G20 Meeting of Economy Ministers. Speaking at the forum, Zeybekçi expressed his condolences for the 27 Australians who lost their lives in the Malaysian plane crash in Ukraine. Noting that the Turkish economy has grown by 6 percent in the last 18 quarters and by 4.3 percent in the first quarter of 2014, Zeybekçi added that Turkey is one of the fastest growing economies amongst G20 countries.

Foreign investments have increased in the last 10 years, proving that foreign investors trust the structural change Turkey is undergoing. Stating that there are 38 Turkish companies within the 250 biggest construction companies in the world, Zeybekçi said that Turkey is the second most important country in the construction industry following China. Since Turkey is a part of the EU customs union, Turkey has signed various free trade agreements with 19 countries, and the agreements signed with Lebanon and Kosovo will come into effect after the related procedures are completed.

Negotiations are ongoing with 14 other countries, noted Zeybekçi. Australia has invested $172 million into Turkey while Turkey had $38 million worth of investments in Australia in 2013. Zeybekçi also touched on the historical bond between the countries and announced that 2015 will be celebrated with various activities as Australia year.

Business leaders in Australia Friday called on G20 leading economies to implement recommendations on structural reforms and free trade that could boost global growth by $3.4 trillion (TL 7.2 trillion) and create millions of jobs. The business chiefs, who are in Sydney for a two-day B20 summit, said their list of 20 recommendations - if adopted by G20 leaders - would help them exceed the 2.0 percent additional GDP target over five years that finance ministers agreed to in February. "What we are recommending is mostly new structural reform measures that would deliver on the G20 growth target and form a blueprint for sustainable economic growth in the medium-term,"

B20 Australia chair Richard Goyder said. "If G20 countries commit to these reforms, the gains will be large, but a failure by any of the G20 countries to commit will mean a significant opportunity cost."

The recommendations call for the free flow of goods, services, labor and capital, an effective and transparent regulatory framework, as well as structural reforms that would boost trade and lift infrastructure investment. Moves toward freer trade could boost global GDP by $3.4 trillion and support more than 50 million jobs across the G20 nations, which "would be akin to adding another Germany to the global economy," the B20 said. At the same time, increasing investments in infrastructure to fill an estimated gap of between $15-20 trillion by 2030 could unlock $6 trillion in economic activity every year and create up to 100 million jobs, the business leaders said.
RELATED TOPICS