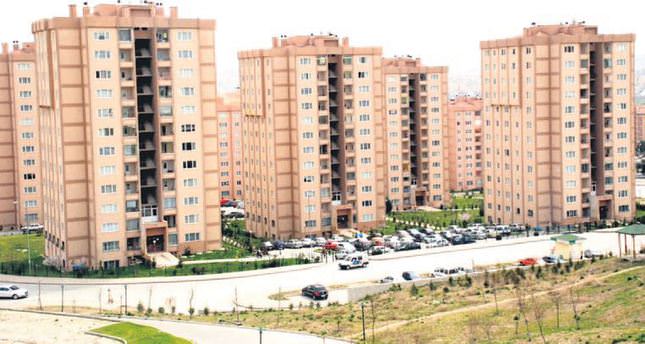 by AA Jul 24, 2014 12:00 am
The number of houses in Istanbul sold to foreign nationals in the first half of the year increased by 150 percent to 2,517 compared to the same period last year, according to figures released by the Turkish Statistical Institute.

According to data compiled by the Turkish Statistical Institute (Turk-Stat), the number of houses that have been sold to foreigners has risen to 2,517 from 1,008 in the first half of the year; a 150 percent increase in comparison to the same period last year. Across Turkey house sales to foreigners increased to 8,507 from 5,234 - a 63 percent rise for the January-June period - in comparison to the same term of 2013. In the cities where foreigners purchase houses the data shows that almost half of the residences sold last year were in Antalya, but attention has moved toward cities such as Istanbul, Sakarya and Bursa this year.

Foreigners bought more houses in the first six months of this year than they did for the entirety of last year. Representatives of the housing industry said that foreigners pay close attention to the urban transformation projects in metropolitan areas. They also stated that Istanbul, which is the leading city in terms of urban transformation, comes to the fore in terms of the number of real properties that are sold to foreigners. Major urban projects in Istanbul include the city's third bridge and its third airport.

Furthermore Istanbul has showed the largest increase in the sale of houses to foreigners in the first half of the year with 509 houses, compared to last year. The head of the Istanbul Constructors Association (İNDER) Nazmi Durbakayım said, "We predict that once the laws regarding reciprocity and urban transformation are passed, the foreigners' attention to Istanbul will climb further; however, the houses that appeal to the foreigners are largely in Antalya."

He added, "Houses that the foreigners demand are being constructed in Istanbul as well. Along with urban transformation, houses with fine views are being built in city centers. New projects are under way in a number of districts including Taksim, Fikirtepe and Zeytinburnu, which grab the attention of foreigners. Foreigners' demand for houses in Istanbul will increase gradually.

Half of the houses in these districts are bought by foreigners while the other half are bought by locals." The Saudi royal family is perhaps the most infatuated with Istanbul where Prince Sultan bin Mohammed bin Saud al-Kabeer, the nephew of Saudi King Abdullah and his wife Princess Aljoharah Saad Abdulaziz al-Saud, bought three mansions at $18 million (TL 37.6 million) from the project of Sultan Makamı in Çengelköy.

The Saudi Prince is trying to get the decorations for the mansions completed before a move in September. $10 million was spent on decorations that were designed at the royal family's behest. In the mansions located toward the Bosphorus, there are six rooms, two halls, two kitchens and six bathrooms. Also, each mansion has one private swimming pool.
Last Update: Apr 16, 2015 12:13 am
RELATED TOPICS