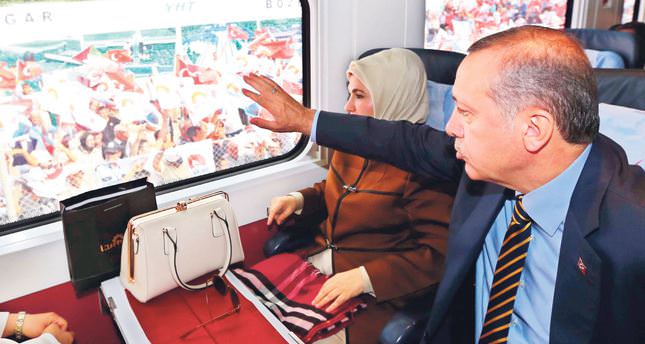 by Daily Sabah with Agencies Jul 26, 2014 12:00 am
Turkish Prime Minister Recep Tayyip Erdoğan inaugurated the a highspeed train link between Ankara and Istanbul on Friday, his latest ambitious grand project to bring the country's infrastructure up to European standards. The project has been repeatedly delayed because of sabotages but Erdogan on Friday traveled on the first train from Ankara to Istanbul with the line open to the general public from Saturday. "We made a promise. We worked hard. We crossed the mountains, and passed over rivers," said Erdogan at Eskisehir, one of several stops the train was making on its way to Istanbul. "Despite all the attempts to sabotage, blockade, and slowdown, we completed the line and opened it for service today."

The government hopes that in the coming years trains will run underneath the waters of the Bosphorus so travelers can arrive in the center of Istanbul. Trains are to run at 250 kilometers per hour (150 miles per hour) along the 511 kilometer (317 mile) line with the journey time slashed to 3.5 hours from the previous time of more than six hours by bus or car. Last year he inaugurated the Marmaray tunnel, which for the first time connected Istanbul's two sides -where Europe and Asia meet- with a metro link deep beneath the waters of the Bosphorus. Erdoğan is also a driving force behind plans for a third bridge over the Bosphorus and a huge new third airport for Istanbul.

The government hopes the Ankara-Istanbul link will help revolutionize traveling habits in Turkey, where most people get around by bus or plane. High-speed trains have connected Ankara with Eskisehir and Konya to the south but this is the first time Istanbul will be connected to the network. Erdogan has set 2023 -the 100th anniversary of the founding of the Republic by Mustafa Kemal Atatürk- as the target to connect Turkey's east and west by a high speed rail line.

Ankara is at the center of the country's railroad network that will facilitate daily excursions between cities. A 405-kilometerlong high-speed train line between Ankara and central province of Sivas is currently under construction. Construction is also underway on a 105-kilometer high-speed rail line between Bursa to the south of Istanbul and Ankara. Currently, the infrastructure of a part of the railroad is being constructed. A 624-kilometer-long high-speed train line project that will connect Ankara and İzmir in the west is being built in three phases.

Infrastructure work is underway on the railway's section between Ankara and Afyon, a western city near İzmir, while the section between Afyon and Uşak will begin construction after a tender later this year. Turkey started building its railways in the mid-19th century during the Ottoman Empire, when world powers like Britain, France and Germany were given concessions to build stretches of track. The story goes that they were paid by the mile, resulting in an often bizarrely circuitous rail network that exists to this day. Development of the railways was also taken up by the first President of the Republic of Turkey Mustafa Kemal Atatürk, but the system fell into neglect in tough economic times from the 1960s when hardly any new track was built.
RELATED TOPICS