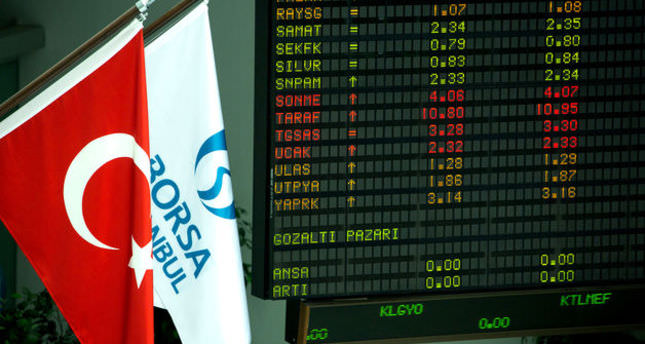 by AA Aug 07, 2014 12:00 am
Turkey's Treasury held two bond auctions worth 3.8 billion Turkish liras ($1.8 billion) on Tuesday and has seen borrowing costs decrease to their lowest levels in recent months. The auction came as the Treasury continued with plans to pay back 40.4 billion Turkish liras of domestic debt for the period from August to October 2014.

The Treasury raised 4.2 billion Turkish liras in the two auctions on Monday. In two days, the Treasury sold a net total of 7.9 billion liras of August 2014 bonds with average yields of of 9.15 percent at the auction. The 10-year, semi-annual bond, which has an expected yield of 4.50 percent, was oversubscribed more than three times - attracting an overall book of 3.58 billion Turkish liras. The twoyear, semi-annual bond, which is expected to realize a yield of 4.10 percent, was more than six times oversubscribed - attracting an overall book of 5.14 billion Turkish lira.

The Treasury said in a statement on July 31 that domestic borrowing for the same period last year was 29.5 billion Turkish lira. On Jan. 29 this year, the Central Bank of the Republic of Turkey introduced drastic interest rate rises in response to the rise of the U.S. dollar against the lira in mid-January. CBRT Governor Erdem Basci insisted the bank would only reduce interest rates when it is convinced the outlook for inflation improves.

However, despite annual inflation hovering at almost double its medium-term target, the bank cut the benchmark interest rate for three consecutive months to 8.25 percent on July 17, in an attempt to boost economic growth. Inflation in Turkey rose slightly last month, from 9.16 percent in June to 9.32 percent, mainly because of a shock increase in food prices, according to the country's statistical authority.
Last Update: Aug 07, 2014 1:20 am
RELATED TOPICS