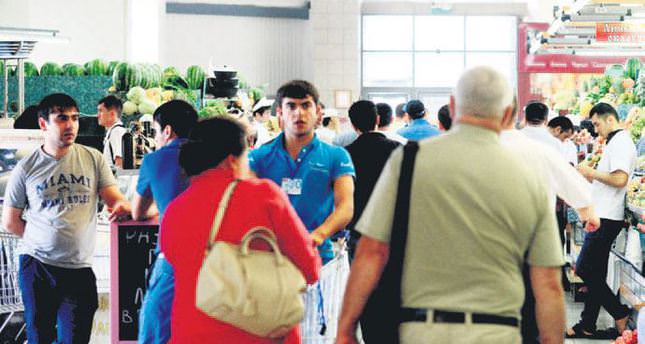 In response to Western sanctions, Russia banned food imports from some Western countries, which raises the opportunity for Turkey to increase its food exports

Turkey is set to benefit from Russian sanctions targeting EU and U.S. products, as Russia looks for an alternative supplier of foodstuffs, especially fruit and vegetables, according to Turkey's Agriculture Ministry.On Wednesday, Russia banned imports of fruit, vegetables, meat, poultry, fish, shellfish, scallops, milk and dairy from the United States, the European Union, Australia, Canada and Norway in retaliation for Western sanctions over the crisis in Ukraine.Turkish Agriculture Ministry officials met with their counterparts on Wednesday to discuss how Turkey's agricultural sector can meet this shortfall. Nihat Pakdil, the Deputy Secretary of the Ministry of Food, Agriculture and Livestock presided the meeting held with the attendance of Assistant chairman of the Russian Plant Quarantine Service Alexie Alekseenko.

The discussions focused on how procedures for exporting to Russia could be simplified and how the number of Turkish firms licensed to export goods to Russia could be increased. Alekseenko noted that these discussions will determine the direction of the trade between the two countries within the coming years and that since the products exported from Turkey will also be delivered to other members of the Russian Federation, the market in question is a relatively extensive one. Alekseenko further stated that the certification criteria for the products to be exported should be in conformity with the norms of both the Russian Federation and also the norms of the customs union.

The officials agreed that a new export process based on exports of mostly agricultural products, animal products and fisheries is on its way along with dairy products, poultry meat and poultry products, eggs and stock for breeding. Separately, Russian Agriculture Minister Nikolai Fyodorov, told Anadolu Agency on Wednesday that Russia primarily wants to increase its imports of traditional agricultural products such as fruit and vegetables from Turkey."Turkey's agricultural products are the primary attraction for us. Taking serious offers from Turkey, I think we will expand the volume of trade between the two nations." One of the first steps the countries will take in this respect will be rearranging "sanitary requirements" for exports. Further, Turkey and Russia will be issuing health certificates required for the export of such new products together.

Turkey is expected to prepare a schedule and according to the criteria Russia is set to determine, such certificates will be issued around mid- September. After the certificates are issued, the quantities of the products to be exported will be determined. The list of export companies willing to export products to Russia will also be updated. In this new era, Turkey will not only increase its exports with Russia but also export foodstuffs to countries that are members of the customs union. In the last seven-month period, Turkey's exports to Russia were valued at $7.09 billion (TL 15.25 billion) with the main export products being textiles, yarn, fabrics, manufactured goods, vegetables and fruits.
Last Update: Aug 15, 2014 1:49 am
RELATED TOPICS