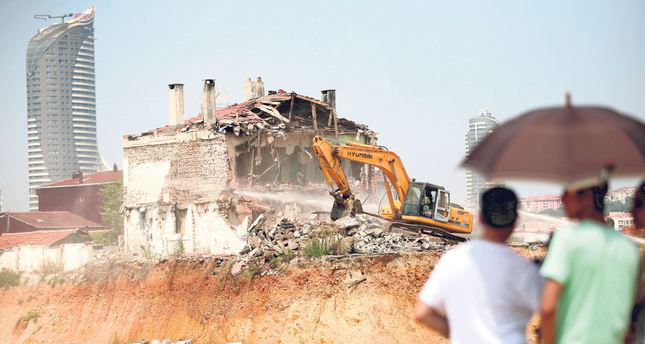 To overcome the challenges which have come from unplanned and unguided urbanization, Turkish authorities give high importance to reconstructing neighborhoods with safer buildings

Speaking to the SABAH daily, Turan noted that while natural disasters damage the economic and social structure of the country, rapid population growth and unpl anne d and unguided urbanization increase the d ama g e suffered as a result of natural disasters. "Natural population growth and immigration increases the demand for housing in cities, but the cities are incapable of meeting normal development speed, causing unhealthy, illegal housing and slums to occur. Various buildings constructed on unsuitable land using poor quality materials and not benefiting from basic engineering and construction techniques and know-how are now threatening both the health and lives of those who dwell in them and also the texture of our cities," said Turan.

He further noted that to leave children a better future with regard to housing and cities, proper and healthy infrastructure must be constructed that take the necessary precautions against various natural disaster risks and that are environmentally- friendly and with the lowest carbon emissions and that cause the least waste of resources. "In the coming years, there will be an increase in building new houses for urban transformation. There are approximately around 18 million dwellings in urban areas and about 5.3 million of them needs to undergo transformation," noted Turan, adding that by 2023, 3 million houses will be more than 50 years old, and urban transformation will become inevitable. "I believe if we mobilize all the potential resources and experiences of our country, we can solve the problem of slums and urban transformation, which have been a problem for Turkey for the past 60 years," said Turan. "Slums and illegal housing areas are not just due to improper behavior or mistakes of individuals or groups but affect a much larger population; therefore, the solution to such crucial problems cannot be left in the hands of individuals or groups, noted Turan, adding that urban transformation is a process in which transformation projects, individuals, project managers (ministries, municipalities, etc.) non-profit organizations, professional organizations, universities and citizens should all unite.

TOKI's urban transformation projects aim to build contemporary urban environments that consider the land, social structure, the housing and the infrastructure as a whole and that offer various rational practices, and TOKI will strive to implement new projects in terms of urbanization. Turan noted that within the scope of the urban renewal program that was initiated together with local governments, transformation work for 282,020 houses located in slums in 334 projects have been implemented, and the construction of 56,354 houses in 128 different projects have been completed.

Unfortunately, not many illegal dwellings and slum-type houses can be demolished with the consent of their owners and re-built according to development plans; therefore, automatic urban transformation is not possible in many places. "Waiting for transformation to occur on its own is not very logical. Therefore, we believe that such strategic decisions in detecting the areas in need of urban transformation should be undertaken by the government," said Turan.

Touching on the challenges of such projects, Turan noted that while the public interest and welfare should be considered, the main aim should be to rehabilitate the run-down districts of cities. "The most difficult obstacle in this respect is to convince the inhabitants. We need to demonstrate that their lives will be improved. Also, various social projects should be implemented. As TOKI, we are working towards building a Strategic Communication Concept in this respect," added Turan.
Last Update: Aug 16, 2014 2:03 am
RELATED TOPICS