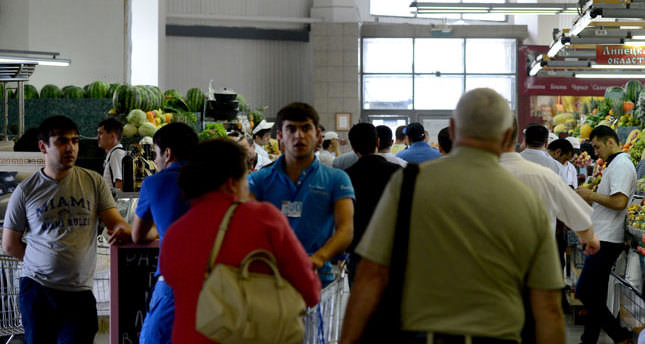 Economısts of international finance institutions agreed that the Russian economy will suffer the most due to the import restrictions placed on food products form the EU and U.S. in response to their sanctions. It is predicted that Turkey's exports will benefit from such restrictions "in a limited fashion." Both the EU and U.S. had agreed to apply new economic sanctions against Russia as a result of its stance on the crisis in Ukraine. Now that the sanctions have been extended, Russia has decided to stop importing important food products from countries that have implemented these sanctions. As a result, Turkey will assume the role as the main exporter of food products to Russia.

Experts of various international finance institutions spoke to Anadolu Agency (AA) on how the sanctions will affect the Russian economy and on the commercial and financial chances that may arise for Turkey. Analysts anticipate that the restrictions will have a deeper impact on the Russian economy than the economies of the U.S. and EU, and even if Turkey benefits from the trade gap in the shortterm, the benefits will be "limited."
Chief Economist for eurozone and Hamburg-based Emerging Markets of HSH Norbank Dr. Cyrus de la Rubia stated that now no financing is possible from the U.S. or the EU for Russian banks that are controlled by more than 12 countries, and this will have an adverse effect on Russian banks that own huge amounts of foreign credit. Answering AA's question on how Russia's cessation of food product imports from Western countries will affect the EU and U.S., Rubia noted that such restrictions will decrease the purchasing power of the ruble and in the end trigger high inflation rates, thus effecting consumption levels in Russia. Commenting on how Turkey will benefit from these sanctions Rubia said, "from an economic point of view, the export of food products from countries such as Brazil, Argentina, Uruguay and Turkey might increase however, things may evolve differently from a political point of view."

Berenberg's Senior Economist Christian Schulz underlined the fact that the EU's sanctions will increase the fragility of Russia's oil-based economy. Schulz further noted that the restrictions applied to imported food products will not have an effect on EU's economy since the export of food products from EU countries to Russia accounts for less than 0.1 percent of the gross domestic product and added, "even if some smaller Eastern European countries will be affected more, these sanctions are not crucial for the European economy." As to whether Turkey will be able to increase its commercial activities with Russia Schulz stated that if Turkey attempts to ignore EU and U.S.-imposed sanctions, there might be pressure from the West. "When various clashes in neighboring countries are considered, I don't think Turkey will risk endangering its relations with NATO's allies," said Schulz.

Netherlands-based ABN AMRO's Emerging Markets Economist Peter de Bruin also highlighted the fact that only 4 percent of exports in the eurozone go to Russia and agricultural and food products are a very small portion of these exports. Therefore, Turkey exporting food products to Russia instead of the EU will have a limited effect only on the Turkish economy. "On the other hand, the Ukraine-Russia crisis might have a negative effect on the Turkish economy since 5 percent of Turkey's exports are sent to Russia while 1.5 percent is sent to Ukraine. Since the Russian economy is stagnating and the political uncertainties continue in Ukraine, the exports to these countries might be put under restraint," added Bruin.
Berenberg's Economist for Turkey Wolf-Fabian Hungerland also stated a similar opinion and noted that Turkey mostly exports vehicles and machinery to Russia but such exports only account for 2.4 of the total vehicles imported and 1.3 percent of the total machinery exported into Russia, which indicates that Russia has other countries that may provide for its needs. "In short, Turkey's exports to Russia will increase but this won't have a major impact on the Turkish economy. It is evident that an emerging country like Turkey will benefit mostly in its agriculture and textile sectors from this situation but the general effect will be limited, especially considering that these sectors do not have an important impact on economic growth," said Hungerland.

Turkey, Serbia, Switzerland, Belarus, Brazil, Argentina and Chile were considered the most advantageous countries to benefit from the gap that will occur when Russia ceases purchase of meat products, fisheries, fruits, vegetables, milk and dairy products from the EU, U.S., Canada, Australia and Norway. However, the foreign ministers of EU countries held a meeting in Brussels recently and requested from EU candidate countries including Turkey and Serbia not to "attempt benefiting from the sanctions applied by the EU to Russia."

Further, the EU Commission is set to announce the measures it will pass for perishable fruit and vegetables for minimizing the negative impact of the "food product embargo" on related sectors. Speaking to press on the matter, İbrahim Yiğit, a Justice and Development Party (AK Party) deputy, noted that Russia's counter-sanctions can be viewed as a huge opportunity for Turkey. "I hardly think that the U.S. and EU will interfere in Turkey's trade with Russia. Even if they do it, Turkey will ignore their requests," he concluded.
Last Update: Aug 19, 2014 1:13 am
RELATED TOPICS