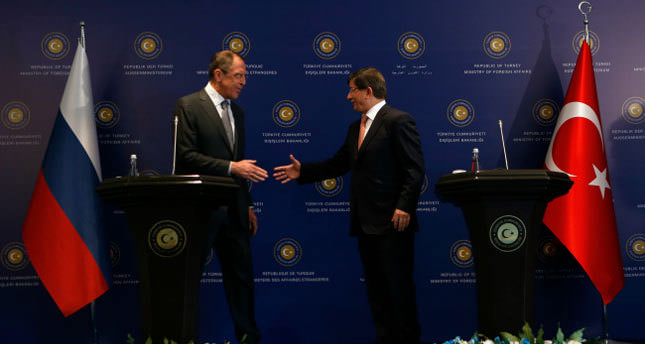 by Hazal Ateş Aug 23, 2014 12:00 am
Russia 's countermeasures against the EU and U.S.' economic sanctions since the Ukrainian crisis have paved the way for an increase in Turkish exports.

Turkey has taken the first concrete steps to establish a free trade zone between Russia and Turkey. While a committee is being set up, the first negotiations are scheduled to start in September. Economy Minister Nihat Zeybekçi on Friday noted that Turkey is planning to become a part of the economic cooperation between Russia, Belarus, Kyrgyzstan, Azerbaijan and Kazakhstan. "We are not looking to establish a customs union, we prefer concluding preferential trade agreements," said Zeybekçi.

While how AK Party's politics will be shaped in the new period once Ahmet Davutoğlu, the new leader and prime minister takes office is still unknown, Zeybekçi stated that production, market and marketing habits need to be renewed.

In order for Turkey to control energy, raw material and consumption networks, it needs to become more active in the Middle East, the Caucasus, northern Black Sea region, the Gulf and North Africa. Zeybekçi also announced that negotiations for signing free trade contracts are ongoing with countries such as Singapore, Japan, Australia, New Zealand, Indonesia and Mexico. "We acted very discreetly about the negotiations to establish a free trade zone between Turkey and Russia, while my Russian counterpart gladly announced it. We will try to gain an advantage from the conflict between the EU and U.S. I am very glad about the new developments, as Turkey will benefit from what has been going on in Russia," said Zeybekçi.

Sources indicate that within a memorandum of understanding signed with Russia recently, which marks the start of millions of dollars of exports, the Ministry of Food, Agriculture and Livestock has decided to complete the process of issuing health certificates that will allow the entry of Turkish products into Russian markets as soon as possible.
Last Update: Aug 23, 2014 2:13 am
RELATED TOPICS