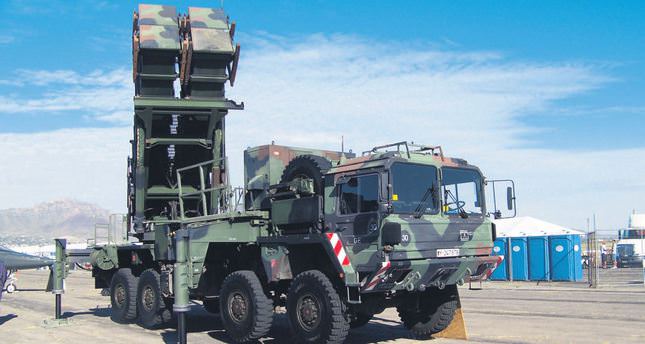 The Defense Industry Undersecretariat announced that the tender process for the Long-Range Missile Defense System Project, one of the biggest projects of the defense industry, which Chinese, American and Italian-French companies have entered, has been postponed for the third time to Dec. 31. According to information compiled by an Anadolu Agency (AA) correspondent, the project carried out in order to ensure air defense at low/middle/high altitudes and at long-ranges, was initiated with the decision of Defense Industry Executive Board (SSİK) chaired by Prime Minister RecepTayyip Eroğan.

Within the scope of the tender the U.S. was competing with its Patriot missile system, China with its FD-2000 and the Italian-French company with its Samp-T system, and it was decided that negotiations will commence with CPMIEC from the People's Republic of China. Turkey's decision to start negotiations with the Chinese firm was not very welcomed by NATO, the U.S. and Europe. Turkey was facing unprecedented pressure from NATO and the U.S. to back away from the deal with state-run Chinese firm CPMIEC. NATO and the U.S. disapproved of the deal for two reasons. The first one was that the Chinese company is on a U.S. government sanction list - for its violations of the Iran, North Korea and Syria Non-proliferation Act. The second reason, as stated by NATO allies, is that the Chinese system is incompatible with NATO systems.

While progress was made with the Chinese firm in terms of technology transfer when compared to other firms, according to sources close to the Defense Industry Undersecretariat, Turkey used this progress to trump in negotiations with the two other western firms. According to information leaked to the press recently, a discount of $300 million (TL 650.38 million) and more technology transfer was requested from the French-Italian joint venture. Again the sources noted that it is most likely that a western firm will win the tender.

According to the instructions of SSİK, if no deal could be reached with CPMIEC then negotiations with EUROSAM consortium would start and if again no deal can be reached then negotiations with the American firm would be initiated. The patriot system launchers can host 16 missiles and have a high hit level. The aerial defense radars of the patriot system can detect enemy missiles at 100 kilometers and after locking on will destroy the target within 15 to 20 seconds. The range of patriots is 70 kilometers. The system also offers an effective defense mechanism against ballistic missiles carrying weapons of mass destruction.

The long-range air defense missile of China, the FD-2000, has upright launching capacity and is deployed with batteries of two and six. The Italian-French Samp-T System can carry eight missiles in one launcher and all missiles can be fired within 10 seconds after locking on. The Defense Industry Undersecretariat requested that all offers remain valid until Dec. 31, 2014. In this respect, it was noted that the air defense system to be acquired is a complex mechanism formed of various systems and sub-systems. The Undersecratriat also said, "Various research and investigations need to take place in order to achieve our strategic plan in areas such as infrastructure to be established, common production areas, technology transfer and industrial participation. Our undersecretariat is busy working on these matters. Therefore, in order to prevent further delays, we kindly request all parties wanting to remain in the process to keep their current offers valid until Dec. 31, 2014."
Last Update: Aug 27, 2014 10:32 am
RELATED TOPICS