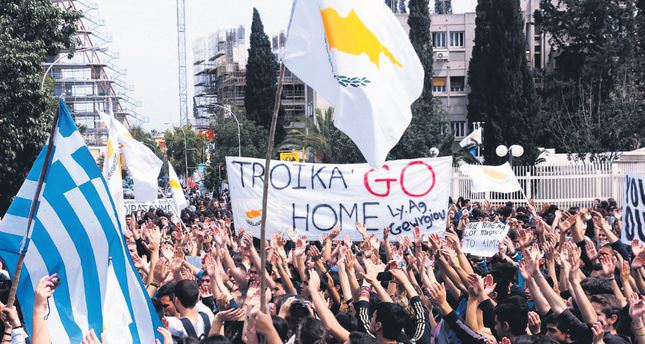 Around 45 percent of loans by Cyprus banks are classed as non-performing because borrowers are seriously late with their payments and under current laws it can take banks 20 years to regain the loan through the courts.Cyprus's level of non-performing banks loans (NPLs) is the highest in Europe at almost 140 percent of GDP, the International Monetary Fund has said. The troika of lenders - the IMF, European Commission and European Central Bank - say unless the new law is passed the NPLs must be classed as non-recoverable and Cyprus banks will fail EU stress tests due in the autumn.Parliament has several times delayed a vote on the foreclosures bill amid opposition fears it could lead to owneroccupiers being evicted from their homes.

The centre-right government of President Nicos Anastasiades says the bill is targeted at major business borrowers who owe the bulk of the money."All countries in the world must have effective legislation," Christis Hassapis, chairman of largest lender Bank of Cyprus, said last week, Cyprus Mail daily reported."There are many borrowers who strategically do not pay. The legislation will force them to come and pay." The next 436 million euros tranche of bailout money is due in late September and the troika has said the foreclosures bill must be passed at a session of parliament scheduled for Friday, September 5.The fate of the draft law remains very uncertain. MPs from Anastasiades' ruling DISY party are expected to vote in favour of the bill but it needs the support of allies DIKO, headed by Nicolas Papadopoulos, whose father Tassos was Cyprus president from 2003 to 2008.

Other parties are expected to oppose the bill and Papadopoulos has proposed many amendments."We have demonised some issues. Without a healthy banking system we have no economy," Central Bank governor Chrystalia Georghadji was cited as telling lawmakers."The banks may be blamed for a lot of things but that doesn't mean that debtors shouldn't pay their loans." Latest figures show Cyprus's recession hit economy contracted an estimated 0.3 percent in the second quarter, the 12th successive quarterly decline, with unemployment hovering around 50 percent.
Prices of apartments were down 7.8 percent and houses down 3.9 percent in the second quarter from a year earlier, according to the RICS property index, while in London, to where Cypriots are alleged to transferred billions of euros, house prices have soared 25 percent in the past year. The volume of home sales in Cyprus has also dropped sharply to just 3,767 in 2013 and 2,620 so far this year from a peak of 21,245 in 2007, according to statistics issued by propery valuers Antonis Louizou. Cyprus has so far received half of the bailout cash agreed with the troika.

In return for the rescue, the Mediterranean island promised in March last year to adopt swingeing austerity measures, wind down its second largest bank, Laiki, and impose losses on savers with the Bank of Cyprus.Depositors with more than 100,000 euros in Bank of Cyprus were hit with a 47.5 percent "bail-in" as part of the rescue package. Credit rating agency Moody's Investors Service said in early August that Cyprus has an "elevated risk of default in the medium-term" because of the high 45 percent level of NPLs.Moody's said Cyprus' Caa3 rating with a positive outlook, reflected the "ongoing credit risks relating to the sustainability of the country's public finances." "Moody's notes that even though the restructuring process of the banking sector is under way, the actions that the authorities and the troika have identified to lower the high NPL levels have not yet been fully implemented," it said.
Last Update: Sep 01, 2014 2:04 am
RELATED TOPICS