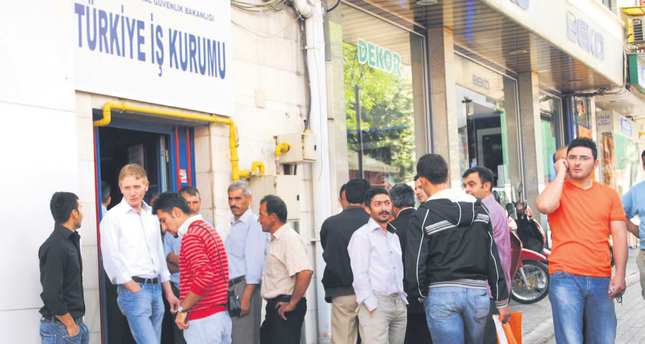 The number of unemployed people increased by 0.3 percentage points in June compared to the previous month, the statistics office of Turkey said on Monday. Unemployment in June rose to 9.1 percent from 8.8 percent in May, breaking a fourmonth downward trend.The 0.3 percentage point figure represents a 103,000 increase in the number of unemployed people.Although Turkey's economy has been creating jobs at a significant pace, the number of people looking for work is growing faster than the economy can employ them.Many authorities regard growth of more than 5 percent as necessary to keep unemployment in Turkey under control.The latest figures come after annual inflation in August rose to 9.54 percent and the GDP increased by 2.1 percent in the second quarter of the year, significantly behind estimates of 2.8 percent.

Commenting on the latest data on the unemployment rate, Dr. Kerem Alkin, economist and president of Istanbul-based Nişantaşı University, said that during the recent global crisis most developing and developed countries had great troubles in creating new employment opportunities, but Turkey has become one of the few countries that could offer new employment opportunities, and now it's trying to maintain this.

Since it is challenging to maintain more than one variable, such as the current account deficit and the growth rate, at a time, precautions taken in one area can affect growth and employment. "It is natural that the employment rate in the second quarter has lowered because the growth rate is lower than expected. Industry will be maintaining its current employment levels. Employment percentages might benefit from precautions aimed at keeping the growth rate around 3 percent. Turkey can keep the unemployment level around 7 percent, but to achieve this, we will need structural reforms,"

Alkin noted. "The population is increasing; new people join the work force, and therefore, employment is increasing," veteran economist Hikmet Baydar told Daily Sabah. He added that some monetary precautions taken to decrease the current account deficit pushed growth rates down in the second quarter of the year. "When the growth rate slows down, it affects employment as well. The only way out of this loop is to limit the import of intermediate goods and to ensure that intermediate goods used for manufacturing final products by industry are supplied from local resources. Otherwise, we will not be able to come up with a permanent solution to unemployment," Baydar concluded.

According to the "General Outlook on Employment for 2014" carried out by ManpowerGroup, the current employment figures for the fourth quarter remain stable. While 25 percent of employers plan to increase the number of staff, 10 percent have decided to decrease it, and 64 percent will not change it. The quarterly issued "General Outlook on Employment for 2014" research figures of ManpowerGroup have been revealed to Anadolu Agency (AA) reporters, and according to the survey, in which about 1,000 employers participated, the expectation that employment will increase in the last quarter of the year is diminishing.

Accordingly, in the last three months of 2014, Turkish employers are being cautious about their employment policies mostly due to changes in the Cabinet and the new prime minister. The most optimistic expectations for the last quarter of the year were from the manufacturing and pharmaceutical industries, while the most cautious sector was micro-scale businesses. On the other hand, employers continue to state the highest employment expectations in Europe, the Middle East and Africa (EMEA) region. S"Turkey has to grow over 5 percent annually. If we remain below 5 percent growth, we cannot reach our targets,"

Economy Minister Nihat Zeybekci said recently, suggesting the government expects the Central Bank of Turkey to ease monetary policy for growth. Interest rates have been a matter of much debate in Turkey for some time since the country's central bank insisted on maintaining high interest rates until clear signs of an improvement in the inflation outlook. Government officials claim this policy suppresses growth in the country.
Last Update: Sep 16, 2014 11:08 am
RELATED TOPICS