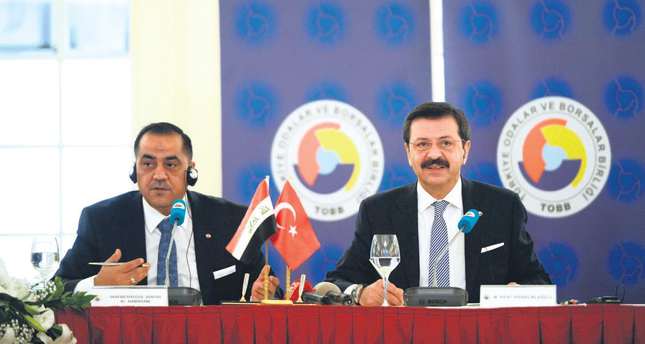 by Daily Sabah with AA Sep 24, 2014 12:00 am
Addressing to Turkish and Iraqi businessmen at an event in Ankara, the Chairman of Turkish Union of Chambers and Commodity Exchanges (TOBB), Rıfat Hisarcıklıoğlu stated on Tuesday that Turkish companies in Iraq have been passing through a turbulent period. "During these tough times which will affect our futures, we need to collaborate and therefore, what we are facing is not acceptable," said Hisarcıklıoğlu.

Hisarcıklıoğlu and Chairman of the Federation of Iraqi Chambers of Commerce Jaafar Rasool al- Hamadani gathered a committee including the chairmen of Bagdad, Basra, Kirkuk and Kerbela Chambers of Commerce to boost trade between the two countries. He further noted that the Turkish business and trade world has been watching the developments in Iraq closely and they believe Iraq will preserve its territorial integrity. Underlining that they value Iraq's territorial integrity, safety, stability and welfare, Hisarcıklıoğlu said that the Turkish business world are in full support of the Iraqi business world.

The Turkish private sector has assumed an important role in Iraq's reconstruction stage and Hisarcıklıoğlu noted that Turkish contractors have undertaken 853 projects equaling $20.8 billion (TL 46.53), creating employment opportunities for thousands of people. Iraq has become the most important trade partner of Turkey after Germany and while Turkey's total exports increased threefold, exports to Iraq increased by 14 times.

Hisarcıklıoğlu noted that while Iraq is an important trade partner, due to the latest clashes and terror threats, there has been a 40 percent drop in trade with 300 Turkish firms had to abandon their operations due to the security threat. "Approximately 7,000 employees had to be discharged in Iraq and Turkish companies requested the transport of their goods through Iran due to the blocked roads in mid-June; the attempts to obtain penalty payments for defaults have been putting pressure on Turkish companies. Turkish firms have not been able to undertake any projects from Iraqi state authorities for the last three years. Even though Turkish suppliers hold international certificates, they still face certain difficulties regarding tenders from state institutions," said Hisarcıklıoğlu and added that such treatment is not acceptable.

Emphasizing the importance of commercial relations between the two countries, Hisarcıklıoğlu said that the private sectors and the representatives of the business world need to strive harder to ensure that security and peace are restored in the region. After hard times, with the implementation of the revised "Foreign Capital Regulations," Iraq will become a country Turkish firms would prefer to invest in more and as TOBB, they are willing to assume a central role in the economic cooperation to be established with Iraq.

Al-Hamadani stated that the border crossing points are not safe and new entry points need to be established and added, "The border crossing points might solve all of Iraq's problems. The Iraqi and Turkish governments know the importance of these crossing points. We need to form a customs union or sign another type of economic cooperation agreement between Iraq and Turkey and both imports and exports should be considered. We need to reestablish our high-level strategic partnership so both sides can protect their own investments," al-Hamadani said.
Last Update: Sep 24, 2014 11:03 am
RELATED TOPICS