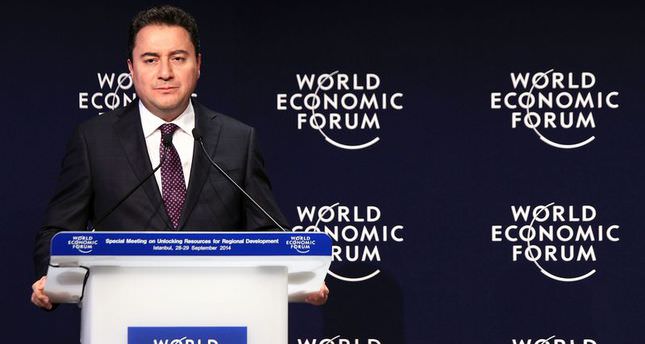 by AA
Sep 29, 2014 12:00 am
Turkish Deputy Prime Minister Ali Babacan said in a meeting at the World Economic Forum in Istanbul that Turkey sees the importance of "networks for solidarity and cooperation" across the Middle East and North Africa region.

Babacan delivered a wide-ranging speech on Monday at a WEF special meeting which attracted 480 participants from over 70 countries.
The minister said one major responsibility of Turkey in the MENA region is to ask for peaceful settlements in disputes and conflicts.

"In this geography accepting multiculturalism is key, as well as respecting differences and seeing diversity as richness, [something] which we have achieved for centuries.

"We are very hopeful for the future. That is why we have lifted visa restrictions and signed free trade agreements with many countries in the region; we did so to allow an easier circulation of people, goods and services."

Pointing to recent developments in Syria, Iraq and elsewhere in the MENA region, Babacan stressed that it is a difficult area to maintain stability.
"Turkey has certain principles whenever it approaches MENA and we continue to respect those principles regardless of the developments," he said.

Answering a question on how the ongoing crisis in Syria and Iraq would affect the global economy, Babacan said that it is now "one of the greatest geopolitical threats to the global economy and a long-term issue" which needs to be solved.

"We are observing a huge humanitarian problem in Syria and Iraq. Twenty thousand people are dead already. Iraq and neighboring countries are natural resource-rich nations. Oil supplies or transportation roots could cause a higher oil profile picture which will affect the global economy," Babacan said.

The Islamic State of Iraq and al-Sham (ISIS) launched an offensive in mid-September, capturing large swathes of land in Iraq and Syria, declaring what it calls a cross-border Islamic "caliphate," killing thousands and displacing millions in the two countries.

It has posted graphic online videos of mass executions, as well as the beheading of Western hostages. Additionally, ISIS has captured a number of oil-producing areas in northern Iraq.

Pointing out that Turkey has undergone major economic and political transformations in the last 12 years, Babacan said the accession process to the European Union helped Turkey with its reform process.

"Accession to the EU increased the quality of democracy and the observance of human rights ... the EU criteria acted as a guide to further reform.

"But we still have a lot to do. We need to improve the quality of democracy, to make sure that fundamental rights and freedoms are even more widely practiced and to ensure that Turkey sees a real rule of law," he added.

Over a million Turkish people found work between June 2013 and 2014 according to Babacan, who said the government offered advantages to companies or employers who hired young people or women.

"Growth is coming both from domestic consumption and exports ... 6 to 7 percent growth next year would be easy for us but it's risky, so we want to keep the growth slow," Babacan added.

Finally, the minister touched upon Turkey's G20 presidency in 2015, saying that Ankara will try to be a bridge between G20 countries and less-developed states "because these countries have huge potential."