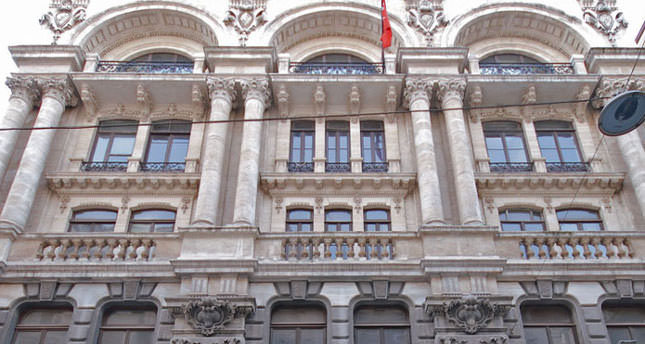 by Daily Sabah Oct 04, 2014 12:00 am
Age-old finance headquarters are moving to newly constructed buildings and away from the Karaköy-Galata neighborhood, located on Istanbul's European side. This neighborhood, which has been the center for finance and insurance institutions since late Ottoman Empire times, is in the process of being transformed into a major culture and entertainment neighborhood, as reported by the Akşam daily on Friday. The government intends to transform a neighborhood on the Asian side into a finance center. Reportedly, after Generali and Mapfre Insurance, Aksigorta is currently moving and will be followed by Zurich Sigorta. The Karaköy-Galata line will be transformed into a tourism center as part of the Galataport Project and the new investments. In this area where insurance companies are mostly located, the companies have started closing down their headquarters one by one and moving out.

After Generali Sigorta, which sold its 130-year-old headquarters building located on Bankalar Caddesi (Banks Road) to İsmet Koçak, the owner of Koçak Gold for TL 30 million ($13), other companies have started relocating their headquarters to mostly Maslak and Ümraniye.

According to a story published in Akşam, currently, Aksigorta which is preparing to move from its headquarters in Fındıklı where it has hosted Belgian King Philippe, has signed agreements with world giant Ageas among others. Aksigorta will relocate to Buyaka Office Towers in Tepeüstü, Ümraniye as of Oct. 20. Aksigorta sold its Fındıklı building in May 2013 for $72 million to İlkhanedan Otelcilik ve Turizm. Zurich Insurance is also moving its headquarters to the Orijin Group's building in Maslak on Oct. 29. Zurich's headquarter building, which belongs to Siemens Personnel Trust, will be used as a boutique hotel. Zurich's new building is designed like technology companies. According to hearsay, Jival Kuyumculuk has purchased the Mapfre Sigorta building located in the Salıpazarı district for $32 million, and Axa Sigorta will also move to Maslak.

The first insurance company to leave the Karaköy-Salıpazarı line was the Italian-based Generali Sigorta. Generali sold its 130-year-old building in Karaköy three years ago and moved to Balmumcu. This building is also expected to become one of the many boutique hotels to be opened in the area.