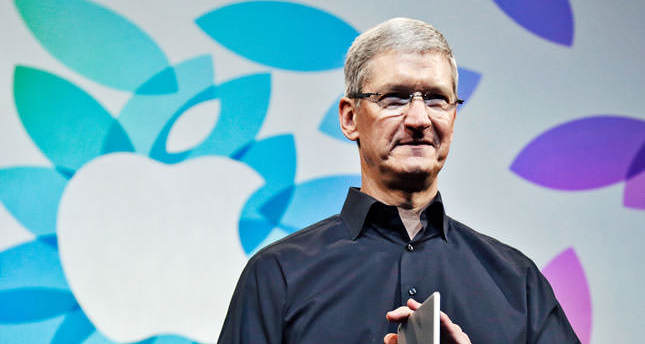 by French Press Agency - AFP
Oct 30, 2014 12:00 am
Apple's Tim Cook on Thursday became the most prominent chief executive to acknowledge his homosexuality, putting fresh focus on gay representation in the boardroom. Cook's announcement, in an essay written for Bloomberg Businessweek, is a watershed since he is the first CEO of a major US corporation to make such a declaration.

"I think the result is that it will make gay culture more mainstream," said Roger Kay of Endpoint Technologies Associates, a consultant and analyst who follows the tech sector. "It does encourage other people in important positions to let go and come out."

According to researchers at the University of Pennsylvania's Wharton School of Business, there were no openly gay CEOs of Fortune 500 companies as of July 2014. British-based BP's top executive John Browne acknowledged he was gay after he was forced to leave office in 2007 following reports that he paid a male escort.

American gay men and women have won acceptance in increasingly prominent roles in entertainment, sports and politics, but very few openly acknowledge their orientation in the corporate world.

"Tim Cook's announcement today will save countless lives," Griffin said in a statement. "He has always been a role model, but today millions across the globe will draw inspiration from a different aspect of his life. Tim Cook is proof that LGBT young people can dream as big as their minds will allow them to, whether they want to be doctors, a US senator, or even CEO of the world's biggest brand."

A December 2013 report by Deloitte on corporate inclusion found 83 percent of gay employees kept their sexual orientation private because of fear of discrimination.

Cook wrote that his sexuality has never been a secret at his company, but acknowledging his homosexuality as a public statement about equality was "more important" than his privacy.

"Let me be clear: I'm proud to be gay, and I consider being gay among the greatest gifts God has given me," Cook said. "I've had the good fortune to work at a company that loves creativity and innovation and knows it can only flourish when you embrace people's differences. Not everyone is so lucky,"

The Apple CEO said coming out was part of his personal fight to stand up for minorities, a value he said his company also embraces. "Being gay has given me a deeper understanding of what it means to be in the minority and provided a window into the challenges that people in other minority groups deal with every day," he said.

"We'll continue to fight for our values, and I believe that any CEO of this incredible company, regardless of race, gender, or sexual orientation, would do the same. "And I will personally continue to advocate for equality for all people until my toes point up." Kay said Cook's sexual orientation has been known in Silicon Valley for some time, and has never been an issue in that community. But he said the latest announcement may end the taboo over gays in the corporate world.

"If you're not ashamed of your sexuality, then no one can use it against you," Kay said." Cook took over as the head of Apple in 2011 after the death of former CEO Steve Jobs.

Cook said that being gay was only part of his identity, and described himself as a "an engineer, an uncle, a nature lover, a fitness nut, a son of the South, a sports fanatic, and many other things." He said he is inspired by civil rights champions Martin Luther King and Robert Kennedy, whose portraits hang in his office.
Last Update: Oct 30, 2014 7:04 pm