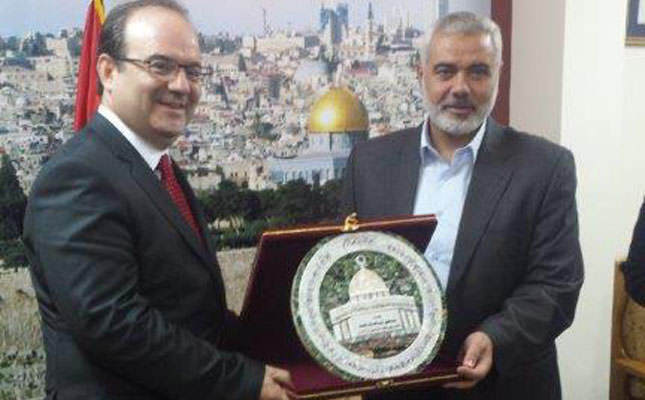 While Israel continues its agression in the occupied Palestinian territories, senior Hamas leader Ismail Haniyeh drew Hamas’ determination for sticking with the unity government. “We need to get closer [with rival Fatah,]” he told Daily Sabah

Ismail Haniyeh, prime minister of the Palestinian National Assembly and the second-in-command of the Palestinian resistance faction Hamas, said that both the Gaza administration and Fatah factions in the West Bank city of Ramallah, need closer relations amid provocations to harm Palestinian unity. He made the comments during a visit by Turkish officials to the Gaza strip,

Speaking to Daily Sabah on Monday, Haniyeh was asked about the tense relations with Fatah and how this effects the unity government. "The reconciliation, which aimed to put the problems of the past behind, needs a strong stance and determination. We need to get closer," he said.

Following a wave of bomb attacks on the homes of Fatah leaders in Gaza on Friday, Palestinian President Mahmud Abbas's Fatah movement held Hamas responsible for the Gaza bomb attacks. "The Fatah central committee condemns the crimes that took place this morning against its leaders and lays the responsibility for these crimes upon Hamas," senior Fatah official Nasser al-Qidwa told a news conference in Ramallah. However, Hamas officials told Daily Sabah that they are not responsible for the attacks.

When asked about a possible visit to Turkey, Haniyeh pointed out that the last time he visited Turkey was in January 2012 and that Turkey is always in his mind. "I will go when the appropriate time comes," he said.

Commenting on the visit by the Turkish delegation, which including the president of the Turkish International Cooperation and Development Agency (TİKA), Serdar Çam, and Turkish consul-general in Jerusalem, Mustafa Sarnıç, Haniyeh thanked Turkey for lending a helping hand to the people in war-torn Gaza.

"Some countries either support us with monetary aid, through diplomatic ways or with medicine, but in the case of Turkey, it does not only give support in these three ways but it also sheds blood for the Palestinian cause," he added, mentioning the raid of the Mavi Marmara flotilla, in which Israeli commandos killed a dozen unarmed activists in international waters.

Haniyeh thanked Çam for the agency's "efficient projects" in Palestine. "I'm closely following your works here in Gaza. I thank President Recep Tayyip Erdoğan and TİKA for being the first to help us during the latest war. The planned distribution of $2 million for 2,000 families and the housing project that will shelter 1,000 families will help the people to stand strong against the aggression," he said.