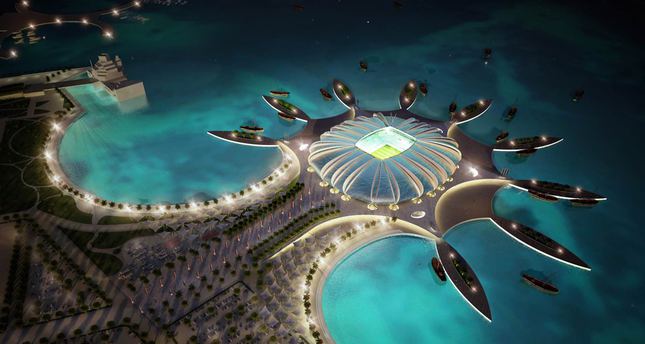 by French Press Agency - AFP
Nov 16, 2014 12:00 am
Qatar, host of the 2022 football World Cup, pledged Sunday to introduce new legislation to replace the controversial "kafala" sponsorship system and improve conditions for migrant workers by early 2015. The current law, which limits the right of movement for foreign workers, would make way for legislation that was "currently under review," said the labor and social affairs ministry.

Under the new legislation, the exit permit that foreign workers need to leave the country is to be replaced by a system under which permission is granted automatically after a three-day grace period. Foreign workers would also be able to change jobs at the end of their contracts without the need for the certificate they currently require from their previous employers showing they have no objections. Those on open-ended contracts would be entitled to change jobs after five years. Employers who confiscate the passports of their workers would face tougher penalties.

"We intend to effect meaningful and lasting change for the benefit of all those who live and work in Qatar," the labor ministry said Sunday. On Thursday, football's world governing body FIFA cleared Qatar of corruption and ruled out a re-vote to decide the host of the competition despite widespread allegations of wrongdoings. Qatar said it never doubted the "clean" record by which it won the bid to host the tournament. "We welcome the scrutiny of international organizations," the labor ministry said on Sunday. "We continue to welcome constructive criticism and feedback, as well as positive acknowledgement of the changes we have made." The ministry encouraged international organizations to share information on specific issues or violations to investigate and "swiftly remedy them." Restrictions in Qatar's labor law affect all foreign workers regardless of their posts."We believe that the people helping us build our country deserve to be fairly paid, humanely treated and protected against exploitation. That is why we are reforming our labor laws and practices," it added.