Toray to supply carbon fiber to Boeing in $8.6B deal 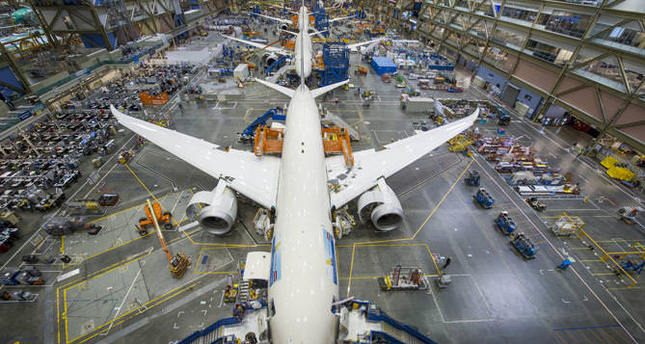 by Nov 18, 2014 12:00 am
Japan's Toray Industries said yesterday it has agreed to supply carbon fiber materials for Boeing's new 777X jet and the Dreamliner in a 10-year deal worth more than one trillion yen. Toray, the world's top carbon-fiber supplier, said it would build wings for the new jet, a large twin-engine passenger aircraft set for delivery in 2020 that is a successor to the 777. Investors applauded the deal - which also includes the extension of an earlier supply agreement for the 787 Dreamliner - and sent Toray's Tokyo-listed shares up 4.14 percent to 842.1 yen by the close, while the broader Nikkei index fell almost three percent.

"Toray and Boeing also confirm that the two companies would negotiate an agreement to promote joint development in a wide range of fields including design, materials and parts production to further increase application of carbon fiber composite materials in the aerospace field," a Toray statement said. Boeing is building a plant in Washington state dedicated to making 777X wings and Toray "has been selected for these main wings," it said. The announcement comes after Toray last year said it would buy smaller U.S. rival Zoltek for about $584 million, on the back of rising demand for carbon fiber materials, which are lighter and stronger than steel and aluminum. The news yesterday was partly in response to Boeing's plan to ramp up production of the Dreamliner, Toray said.

"With Boeing planning to raise the number of 787 aircraft being produced every month from the current 10 planes to 12 per month in 2016 and 14 per month by the end of the decade - and the ratio of larger models also expected to increase - the demand for composite materials also is expected to increase," the Japanese firm said. Last month, Boeing raised its full-year profit forecast on strong third-quarter earnings, but analysts said investors are worried about high production costs of the signature Dreamliner, which has been hit by a series of troubles. A battery problem on an All Nippon Airways (ANA) Dreamliner last year forced an emergency landing, which ultimately led to a months-long, worldwide grounding of the plane. Other faults included problems with an air pressure sensor and the brake system. Boeing also said earlier this year that hairline cracks have been found in the wings of some of the jets due to a manufacturing problem.

In September, the Japanese probe into the Dreamliner battery problem wrapped up with investigators saying they still had not found the root cause, and neither Boeing nor Japanese battery manufacturer GS Yuasa have been able to pinpoint what caused the battery to overheat. The domestic ANA flight in January 2013 was forced to make an emergency landing after pilots noticed a burning smell inside the cockpit that was traced to the plane's lithium-ion battery pack.