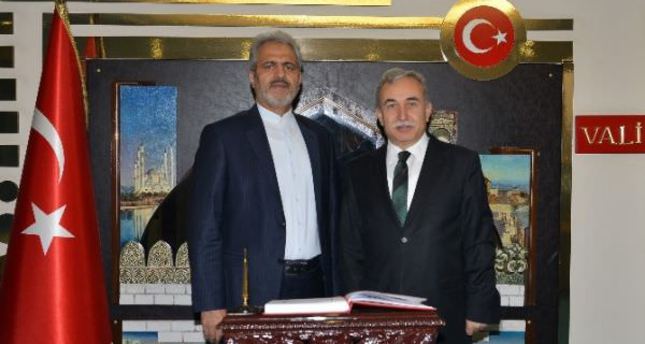 by Daily Sabah with IHA
Nov 20, 2014 12:00 am
Iran's Ambassador to Turkey, Ali Rıza Bikdeli, said that he is working on improving commercial relations between Iran and Adana, a southeastern Turkish province, despite previous border disputes.

Commerce between Turkey and Iran had suffered after Iran held up Turkish cargo lorries several months ago, forcing the consideration of new trade routes between the two countries. But Bikdeli has vowed to improve commercial relations between Iran and Turkey.

"Our borders are all peaceful," he said. "We want to increase our trade volume, which is constantly increasing and is currently about $22 billion. We are aiming to reach a $30 billion trade volume as of 2015."

Bikdeli visited the Adana Chamber of Commerce, together with the Undersecretary of Economy, Ali Rıza Jabbari, and the Undersecretary of Trade, Hamid Zadboom, and discussed investment and trade opportunities between the two countries with the Deputy Chairman of the Board of Directors of the Chamber, Mehmet Şahbaz.

Speaking at the meeting, which board member Mehmet Özel and Assistant General Secretary Birol Yarman attended, Şahbaz said that they were honored to host the ambassador. "As two Muslim countries who share a border, we have to do business with each other and cooperate. It is better to shop from a friend; however, when the trade between the two countries and between Adana and Iran is considered, the figures are disappointing. As the Adana Chamber of Commerce, we are willing to do our part to improve such figures," said Şahbaz.

Highlighting the fact that there are cultural and historical connections between the two countries, Bikdeli said trade was the backbone of improving relations. "Within the last three years, the trade volume has broken records and we are working hard to increase the volume to $30 billion in 2015.

"The underlying reason behind my Adana visit is to effectively increase the trade between Adana and Çukurova in 2015. I am glad to observe the chances for cooperation in agriculture and industry between our country and Çukurova," said Bikdeli.

Jabbari and Zadboom noted that no business trips have been made from Adana to Iran. Iran will invite businessmen from Adana to Tehran as well.