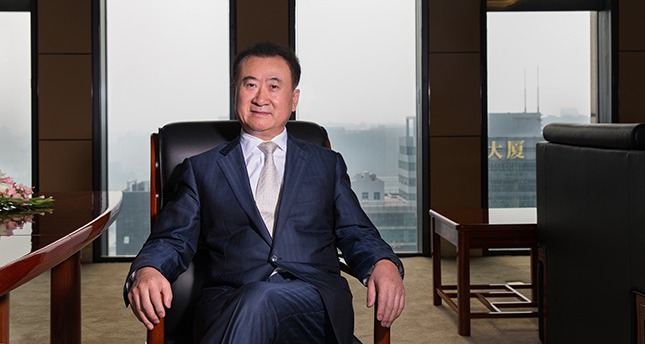 by Dec 24, 2014 12:00 am
Wang Jianlin rose from being a local bureaucrat to China's richest man by transforming a debt-laden, state-owned property development company into the sprawling Wanda Group, and the flotation of one of its subsidiaries Tuesday may propel him back up the table of fortune now dominated by Internet moguls.

Jianlin has penchants for karaoke and collecting, and has an impressive collection of fine art, property projects in top markets around the world and an ever-expanding portfolio of companies including cinema chain AMC and yacht builder Sunseeker. He topped the Forbes China Rich List in 2013 with an estimated net worth of $14.1 billion, but was displaced this year by charismatic Internet entrepreneur Jack Ma after he floated his e-commerce powerhouse Alibaba Group in the world's biggest-ever initial public offering (IPO). Ma's fortune is now estimated at nearly $20 billion. Jianlin dropped to number four, though his ranking could rebound after Dalian Wanda Commercial Properties, the flagship subsidiary of Jianlin's Wanda Group, raised $3.7 billion in an IPO earlier this month by selling a 13.4 percent stake - valuing the firm at $28 billion and Wanda Group's 44 percent post-flotation share at $12.5 billion. Wanda Group is a far cry from the near-bankrupt, state-owned property developer in the northeastern port of Dalian where Jianlin was appointed as general manager in 1988. The company's shares were slightly up at 48.2 Hong Kong Dollars ($6.21) in the first hour of its trading debut on Tuesday in Hong Kong. Jianlin himself owns more than 98 percent of Wanda Group, with the remaining sliver held by his only son, Wang Sicong. Jianlin and his wife together own around another 10 percent of Wanda Commercial. The parent conglomerate, which has interests in hotels, entertainment and retail, saw $2.06 billion in profits last year according to its website.

Jianlin has sought to downplay speculation on the link between his success and his government ties, saying previously that he wanted to build Wanda into a world-class company "depending totally on the market, not government resources." However, he is unmistakably close to Beijing, clutching multiple official titles ranging from delegate at the ruling Communist Party congress in 2007, to a senior member of China's top political discussion chamber for five years until 2013.

Jianlin, 60, turned to culture and tourism as Wanda Group's new growth drivers in 2009, when the global financial crisis dealt a heavy blow to China's real estate market. The company has expanded into film production, theme parks, print media and art investment since.