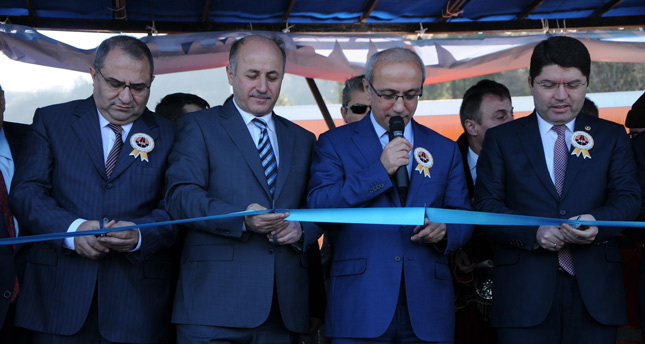 by AA Dec 26, 2014 12:00 am
Transport, Maritime and Communication Minister Lütfi Elvan said yesterday that his ministry plans to construct the world's second largest tunnel, which is slated to connect the Black Sea Region to southeastern Anatolia, by passing through eastern Anatolia.

"The length of this double track tunnel will be approximately 30 kilometers with a single tunnel being 14.7 kilometers long. You will see new tunnels in whichever city you visit, and this is one of the main indicators demonstrating Turkey's progress and development, Elvan said.

Speaking at the opening ceremony of the Bartın-Amasra tunnel, Elvan said, "The matter of opening new corridors in the Black Sea Region, especially from the north to the south, remained unaddressed for years. Since 2003, the Justice and Development Party [AK Party] government has been addressing this topic and implementing projects that were unimaginable in the past."

"Today, we will open a tunnel that will reduce the trip to Bartın from 30 minutes to five, which is an important gain for the city and our country. We have ongoing work on divided and one-way roads in all the country's cities. We have around 2,200 construction sites across the country. Our tunnel projects continue day and night in summer and winter. What we need in such a beautiful country and tourism center is a strong transportation infrastructure, which is the core of a city's progress and development."

In response to the question about whether imported cellphones will be taxed and what point Turkey has reached in terms of domestic cell phone production, Elvan said, "Currently, there are domestic firms that produce ultra-modern smartphones. But they only meet approximately 8-9 percent of Turkey's requirement for mobile phones, which is insufficient for us. We want to increase this figure. Last year, we imported $2.7 billion worth of mobile phones. Encouraging the production of mobile phones in Turkey will contribute positively to our current account deficit.

"The Economy Ministry will take steps to this end, but as a ministry, we will also provide great support to research and development activities for information and communication technologies, and as of 2015, we have allocated a fund of TL 1 billion ($432 million), all of which will be granted in cash."