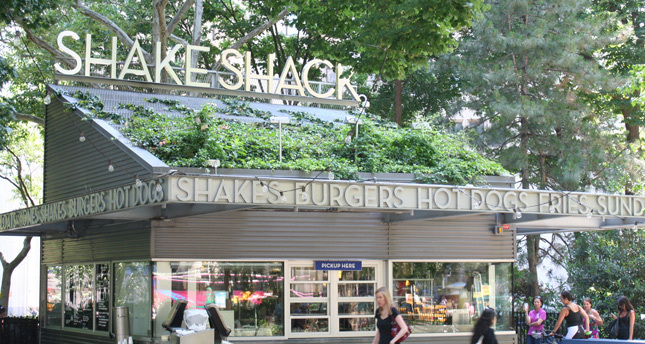 by Associated Press Dec 31, 2014 12:00 am
Shake Shack is bringing its burgers, milkshakes and crinkle-cut fries to Wall Street. The burger chain filed for an initial public offering Monday, hoping to raise as much as $100 million. It didn't say how many shares it plans to offer, or at what price, so that number may change. It plans to use the cash raised to open more restaurants, including its first one in Austin, and to renovate existing stores.

The origins of the restaurant date back to 2001, when Union Square Hospitality Group, a company owned by restaurateur Danny Meyer, opened a hot dog cart in Manhattan's Madison Square Park. Three years later a more permanent kiosk opened in the same park. There are now 63 Shake Shack restaurants around the world. In 2013, the company had revenue of $84.5 million, up 45 percent from the year before. It posted a profit of $5.4 million in 2013, up 31 percent from 2012. Shake Shack cooks its burgers to order and promotes its use of natural ingredients, including hormone- and antibiotic-free beef. It's known for its long lines and its vibrating pagers that signal when an order is ready. The chain calls its restaurants "shacks," and uses the word to describe its menu items.

The ShackBurger, for example, is topped with ShackSauce and a hot dog is named the Shack-cago Dog. Other fast-casual restaurant operators have fared well after their IPOs. Shares of El Pollo Loco Holdings Inc., a chicken chain, have risen about 40 percent since its July IPO, while shares of Mediterranean-style restaurant chain Zoe's Kitchen Inc. have doubled since their April debut. Shake Shack Inc. plans to list its stock on the New York Stock Exchange under the ticker symbol "SHAK."