Equity investors profited the most in 2014 despite global uncertainties 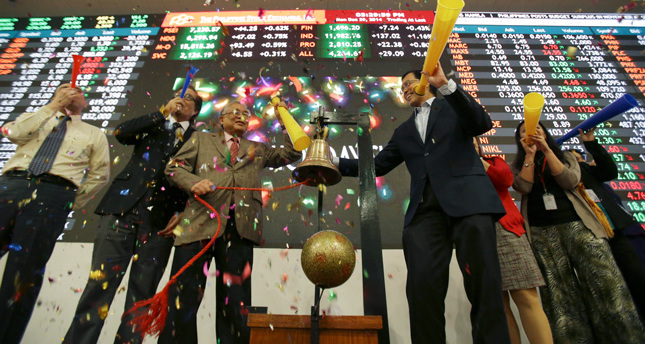 Political and economic agendas in 2014 were full of uncertainties, resulting in steep fluctuations in financial markets. Still, investors in the equity markets exploited the instability to make significant gains

The U.S. Federal Reserve's announcement that it will terminate its record financial stimulus program - known as quantitative easing - which was initiated six years ago after the 2008 economic crisis, political developments and following the volatility observed in currencies of developing countries, the BIST 100 index had closed 2013 with a 13.3 percent decline.

However, this year, BIST 100 has recovered its losses and closed the year with an increase. The Istanbul Stock Exchange Market has been the fifth on the list of highest-rising stock markets in the world with an increase of 24.61 percent in 2014. Along with the Fed's decision to narrow the size of its fund-purchasing program on the basis that the benefits thereof have declined during the meeting held between December 17 and December 18, the pressure on capital inflow due to local political developments resulted in a devaluation of TL in the first month of 2014, and the BIST 100 index to plummet to 60.754, the lowest level observed since July, 2012.

During the same period, due to the inflation rate which was targeted around 5 percent in 2013 to increase to 7.40 percent, the Central Bank of the Republic of Turkey (CBRT) called on the Turkish government to take precautions, and after the U.S. dollar / TL rate peaked at 2.39, CBRT decided to hold an extraordinary meeting on January 28 to take measures for ensuring price stability. After CBRT increased the indicative interest rate from 4.5 percent to 10 percent, the U.S. dollar exchange rates saw a steep and fast decline and continued to fall to 2.0618 during the first six months of the year.

With Russia's military intervention in the Autonomous Republic of Crimea in Ukraine in March, geopolitical risks became a major issue in global markets and accordingly, the European Union passed the decision to impose sanctions on Russia.

Meanwhile, after the March 30 local elections political stability was restored in local markets, and with increasing purchases and investments of foreign investors, the average index in Borsa Istanbul (Istanbul Stock Exchange) increased by 11.5 percent, the fastest monthly rise in 2014.

Given all these positive developments, the Dollar/TL exchange rate was stabilized at 2.11 level and BIST 100 index increased above 74.000 points; compound interest of benchmark bonds dropped down to 9.34 percent from 11 percent.

Negative interest from the ECB, ISIS risk and Argentina's default

During 2014, global markets had concerns about Europe and the E.U. started applying negative interest in June, with the decision of the European Central Bank (ECB) passed on June 5 to decrease the indicative interest to 0.15 percent and deposit interest rates to (-) 0.10 percent. Further, the chairman of the European Central Bank, Mario Draghi, also started taking additional precautions regarding monetary policy applied. After the ECB's decision, the euro/dollar parity declined, the interest and exchange rates also declined in Turkey, and with the continuing net purchases of foreign investments, BIST 100 index increased; ensuring profits for its investors for the fourth time in a row.

While the expectation of monetary expansion in Europe had eased the tension of economic markets, the terrorist organization Islamic State of Iraq and al-Sham's (ISIS) invasion of Iraq's Mosul on June 10 again reminded the markets of ongoing geopolitical risks. This became the most crucial topic for global markets, and while crude oil prices started increasing, pressure on the sale of crude oil soared mainly on markets of petroleum exporting countries.

As Argentina could not come to an agreement with hedge fund companies to which it owes around $1.5 billion, the country's failure to pay its debts triggered another moratorium credit event after 13 years, and adversely affected mainly the assets of developing countries and global financial markets.

The Presidential elections and the ECB's ABS move

Another political uncertainty was eliminated when Recep Tayyip Erdoğan, former Turkish prime minister won the presidential race on August 10. After his inauguration, the local markets were concerned with the new cabinet and mostly how the economy administration would be shaped. Upon the delegation of Ahmet Davutoğlu as the new prime minister and as the economy administration did not undergo any major changes, trust was restored in the local markets.

The second quarter GDP figures announced in September by the U.S. revealed the highest growth figures since the last quarter of 2011 with a 4.6 percent increase. The normalization and stabilization of the country's economy initiated discussions that the interest rates might be increased earlier than expected. On the other hand, the ECB again decreased the interest rates on September 4 for the second time and set the deposit rates at (-) 0.20 percent, marginal lending rate at 0.30 percent and the indicative rates as 0.05 percent.

Chairman Draghi further noted that they have revised their GDP increase expectations for 2014-2016 downward and that Asset Backed Security Purchase (ABS) Scheme was scheduled to come into force in October.

During this period, after a 4.7 percent increase in growth in the first quarter, Turkish economy couldn't meet the expectations in the second quarter and only a 2.1 percent increase was observed in GDP.

Given the increasing doubts about the state of the European Economy and the progress observed in the U.S. economy, the dollar index soared to the 86 level in September, the fastest increase observed in the year and the exchange rates for other currencies declined. While the dollar /TL parity increased from 2.14 to 2.29, the BIST 100 index which had entered September over the 80,000 level dropped down to 73.846.

Global markets that had year-long ongoing concerns about the lack of global economic growth, welcomed the last quarter of the year with more concerns about the negative effects of Fed's decision to end bond purchases on the exchange rates of currencies particularly of developing countries as well as on global capital flows.

However, Draghi's announcement that the ECB's purchase of asset backed securities is set to commence in the last quarter and will last for at least two years, created a more positive atmosphere in global markets. Fed's statement at the October 29 meeting that interest rates will be maintained at low levels for a significant amount of time while it concludes its asset purchasing program, was also another factor that eased the tension observed in the global markets.

Toward the end of October, the Japanese Central Bank, Bank of Japan's (BoJ) surprise decision to increase its asset purchase amount and the monetary based around 60 to 70 trillion Yen to 80 trillion again accelerated improvement of the global markets.

With BoJ and ECB taking over the significant role FED had in global monetary expansion, American stock exchange markets boomed, and the dollar/TL parity increased to 2.19 in Turkey and the compound interest of benchmark bonds to 8.55 percent.