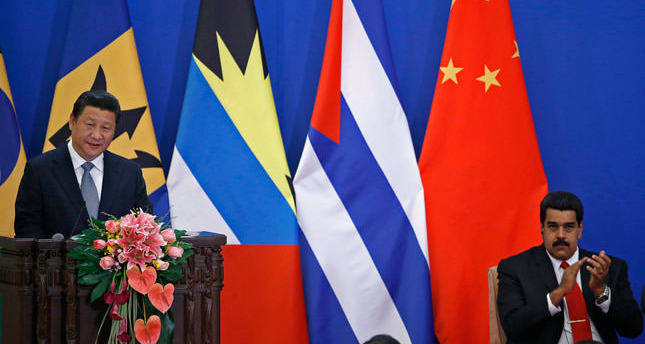 While Leaders of the Community of Latin American States gathered in Beijing for the first time, Chinese President Xi pledged to use his country’s economic clout to support billions of dollars in regional projects

Chinese President Xi Jinping pledged yesterday $250 billion in investment in Latin America over the next 10 years, as part of a drive to boost Beijing's influence in a region long dominated by the United States. Leaders of the Community of Latin American and Caribbean States, or CELAC - a bloc of 33 countries in the region that excludes the United States and Canada - gathered in Beijing for the first time for a two-day forum. The forum, which also marked the first time China hosted the body, came at a time when Beijing is trying to step up its presence in the region as it clamours for more resources.

Xi said in a speech that two-way trade between China and Latin America was estimated to rise to $500 billion within the next 10 years. "I believe that this meeting will achieve fruitful results, give the world a positive signal about deepening cooperation between China and Latin America and have an important and far-reaching impact on promoting South-South cooperation and prosperity for the world," Xi said. China and Latin America are cooperating in the areas of energy, infrastructure construction, agriculture, manufacturing and technological innovation, Xi said. China is interested in the region for resources and markets, said Deng Yuwen, a Beijing-based political analyst and former deputy editor of the Central Party School's journal, Study Times. "Obviously, China has the intention to compete with the U.S. for a greater sphere of influence in the region," said Deng. "But whether this strategy will weaken U.S. influence now is hard to judge."

China, the world's second-largest economy, is buying oil from Venezuela, copper from Peru and Chile, and soybean from Argentina and Brazil. In return, China has pumped billions of dollars in investments in the region. On Wednesday, Venezuelan President Nicolas Maduro said he had secured more than $20 billion in investment from China, while Ecuador said it obtained a total of $7.53 billion in credit lines and loans from China. "To repeat what (former) President Hugo Chavez said, China is demonstrating to the world that a country does not necessarily seek hegemony as it grows stronger," Maduro said in a speech that was translated into English. The cooperation with the region comes even as many of them retain diplomatic ties with Taiwan, which China regards as a renegade province. Out of the 22 states that still recognise Taiwan, 12 of them are in Latin America and the Caribbean.