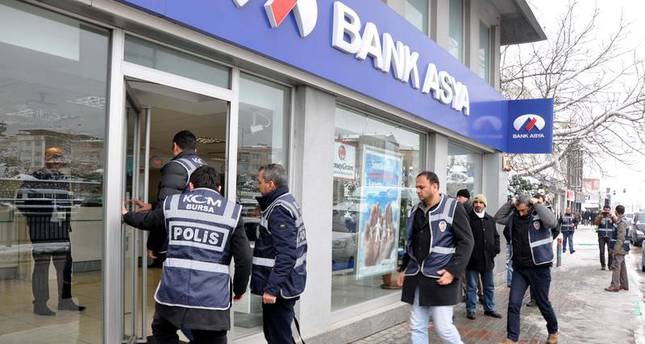 After warning calls regarding illegal banking transactions at the Yıldırım Branch of Bank Asya, teams of the Banking Regulation and Supervision Agency and the Financial Crimes Investigation Board have raided the bank

Investigators from the Banking Regulation and Supervision Agency (BBDK) and the Financial Crimes Investigation Board (MASAK), have raided the Yıldırım branch, one of the biggest branches of Bank Asya in the province of Bursa. The BDDK and MASAK have been investigating Bank Asya, which is linked with the Gülen Movement, since the December 17 coup operation. The operation was initiated on the orders of the Bursa Prosecutor's Office upon several complaints, and account files were seized. Police also seized hard drives in order to detect whether any illegal transactions had taken place.

The details of the raid have now been revealed and according to initial investigations, the branch has been granting irregular loans, opening dubious accounts and transferring unrecorded funds. It was determined that letters of guarantee required by the schools of the Gülen Movement abroad were issued and sent out from this branch. Furthermore, the branch has declined the requests of its customers to withdraw their funds, close their accounts or to transfer commercial accounts to other banks after the December 17 and December 25 coup attempts, which were carried out in order to overthrow the government by the Gülen Movement.

It was revealed that the branch had requested repayment of loans it had previously granted with extremely high interests from its customers, and many citizens had to pay many times more than the initial loan amount they had borrowed. Documents seized also indicate that some customers had to sell their houses or cars in order to end their business relations with the bank. While it was determined that the branch was granting irregular and dubious loans, after the coup attempts, the bank's business deteriorated, yet high amount of funds were transferred to the bank from companies that are closely linked with the Gülen Movement. The Yıldırım branch, was one of the branches that had the highest amount of dubious fund transfers. Bursa is also one of the cities in which the highest amount of donations have been collected by the Gülen Movement, and it was revealed that the branch was under the control of Cansun, who escaped to Pennsylvania, where Fettulah Gülen, the head of the Gülen Movement currently resides, following the coup attempts in December together with the former Bursa Governor, Şahabettin Harput. All donations collected in Bursa have been transferred from this branch and some of the holdings that are known to have close links with the movement all hold accounts at the branch.

The investigation was initiated in order to examine irregular loans, dubious accounts opened in order to benefit from deposits that are subject to insurance, and funds deposited in the bank without stating the source and illicit funds. However, due to the confidentiality of the case, the Chief Prosecutor's Office has not made any announcements yet. Still, some resources that used to work with this branch have noted that the deposits declared did not match the actual deposit held by the bank and the sources of such funds were being investigated.

Teams from the Financial Bureau of Bursa's Directorate of Anti-Smuggling and Organized Crime Branch are currently investigating the files, and BDDK specialists are copying the data from the hard disks seized.

The bank has been included within the scope of Article 70 of the Turkish Banking Code due to the deterioration of its financial structure last year, and the results of this investigation will have an important role in shaping the future of the bank. Along with irregular loans and letters of guarantee, if evidence is found that is deemed as an element of a criminal act related to the depositing of dubious funds without any clear source, the bank may be seized by the Saving Deposit Insurance Fund and the process of liquidation may commence.