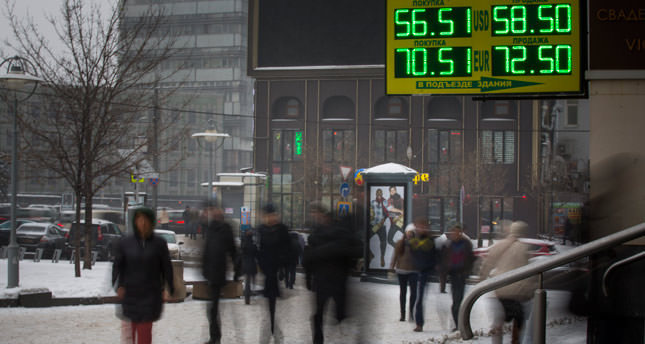 by Associated Press Jan 13, 2015 12:00 am
The Russian ruble accelerated its fall on Tuesday amid a renewed decline in the price of the country's valuable oil exports. The currency was down more than 4 percent in afternoon trading in Moscow, at around 66 rubles per dollar. The ruble hit a record low of 80 per dollar in mid-December before recovering a bit, but it has been steadily falling since the start of the year.

The sale of oil is Russia's main revenue earner, so the months-long slump in energy markets has weighed on the country's economic outlook and markets. The price of Brent crude, an international variety of oil, has plunged from $115 a barrel in June to around $47 a barrel on Tuesday. Western sanctions over Russia's involvement in the conflict in Ukraine have also hurt the country's markets, with the currency's fall among the more striking developments. Last year, the ruble was the world's worst performing currency along with the Ukrainian hryvnia. Russia's central bank has tried to shore up the ruble by sharply raising its key interest rate. Higher rates tend to support a currency by enticing foreign investors with higher returns. It has intervened outright in currency reserves, by selling foreign currencies and buying the ruble. Its foreign currency reserves have dropped below $400 billion for the first time since August 2009.

The central bank has meanwhile also offered dollar and euro loans to banks so they can help companies that need foreign currencies to finance operations. The move is intended to help cushion the impact of Western sanctions that locked many Russian companies out of global capital markets. In another attempt to support the ailing currency, the government encouraged major exporters to more regularly sell their Byearnings of foreign currencies to help meet market demand.

Despite all these measures, investors remain concerned about the impact of slumping oil prices. Russia's economy is expected to contract by more than 4 percent this year if oil prices remain at their current level. President Vladimir Putin said last month that Russia would overcome the current crisis in no more than two years, but he so far hasn't offered any specific plan for an economic restructuring that would ease the nation's heavy reliance on oil and gas revenues.