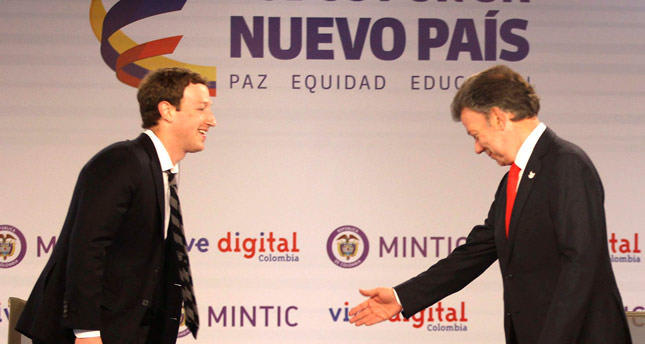 by Associated Press Jan 16, 2015 12:00 am
Facebook founder Mark Zuckerberg traveled to Colombia on Wednesday to bring his global Internet-access initiative to Latin America. In an event with President Juan Manuel Santos, the billionaire explained how even low-end mobile phone users in Colombia will now be able to access for free a limited number of websites thanks to a partnership with a local cellular phone provider, Tigo. Colombia is the fourth country where Zuckerberg is rolling out Internet.org, which aims to bring the ınternet to the two-thirds of the world's population that lacks access. It's also available in Zambia, Kenya and Tanzania. It was Zuckerberg's first time in Colombia and he took advantage of the one-day visit to hold the first-ever town hall meeting with Facebook users outside the United States.

The 30-year-old CEO answered questions about free speech, Internet connectivity and what he sees as media misconceptions about his company. Asked how much he knew about Colombia before his visit, Zuckerberg said he's learned a bit about the country's biodiversity and that he's a big fan of Colombian pop singer Shakira.

The social network follows the laws of countries it operates in, which can mean not showing content on its site that is banned in a particular country. Asked if Facebook, it would break the law in a country that doesn't permit freedom of speech, Zuckerberg said if it did that, the country might just block the service entirely. That said, he noted there are several countries Facebook does not operate in "and our business is doing just fine." He said a big misconception about Facebook is that it does things such as Internet.org for business reasons, to get more people on Facebook so it can make more money. "I can promise you that if what I cared about was making more money, I would take the engineers and the people who are working on Internet.org and spreading connectivity around the world and have them go work on our ads product," he said.