Russia tells Europe to take it or leave it 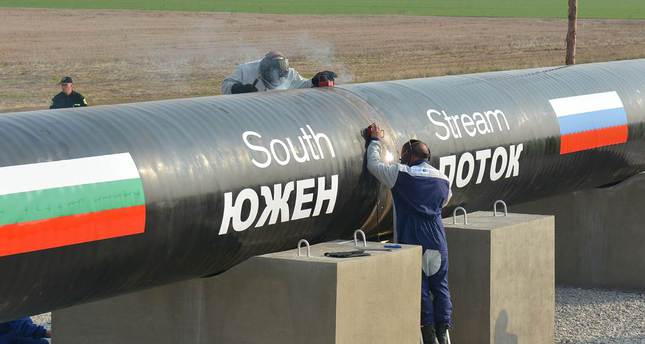 After a month and a half of commenting on and discussing the issue, EU officials and Russian authorities have finally stated their clear opinion on the cancellation of the South Stream project: There is no turning back

EU officials are trying to come to grips with Russia's clear declaration on Wednesday that the natural gas supplied through Ukraine would be cut and diverted to the planned pipeline toward Turkey and that Europe would have to extend its network to the Turkish-Greek border if it wanted to continue purchasing the gas.

The move comes after Russian President Vladimir Putin announced on Dec. 1 in Turkey that the South Stream Project, which was supposed to transfer gas via Bulgaria, would be dropped. He said it would be replaced by a pipeline project through Turkey. With the South Stream being discarded, Russia and the EU had initiated talks on the future of energy relations. According to the written statement disclosed by the Russian Energy Ministry, Energy Minister Alexander Novak negotiated European Commissioner for Energy Union Maros Sefcovic on the resumption of energy talks between Russia and the EU.

During the talks that were held in Russia Wednesday, Novak stressed the necessity of adopting a common discourse to boost relations, despite differences of opinions concerning Ukraine. He said, "Ultimately, we have one common goal: Creating a reliable and predictable energy policy which is independent from global crises and can satisfy long-term demands." Novak and Sefcovic also exchanged views about the infrastructure of new pipeline, which is slated to reach Turkey through the Black Sea. Novak noted that the new pipeline would be constructed in accordance with EU infrastructure standards.

Following the talks, Sefcovic also met Russian Deputy Prime Minister Arkady Dvorkovich and Gazprom CEO Alexey Miller. During a press conference, Miller remarked that the South Stream pipeline project was no longer applicable, adding, "The Turkish Stream is the only route along which 63 billion cubic meters of Russian gas can be supplied, which at present transits Ukraine. There are no other options." Miller also said that the EU has a few years to construct the necessary infrastructure to transport gas to the Greek-Turkish border. Miller stated that the EU countries should soon begin building new gas pipelines, warning that this gas could be otherwise directed to other markets. Miller stressed that the danger of the gas that flows through Ukraine being cut continued, adding that this threat increased especially in January and February when the consumption peaked. Due to financial difficulties, Ukraine failed to buy the required amount of gas in November and December, Miller said. Ukraine draws gas from its underground storage facilities, rather than buying it from Russia, Gazprom CEO said. Russia-EU negotiations are expected to resume on Jan. 19.

Speaking to Daily Sabah, economist Cemil Ertem said the Wednesday's decision showed Russia had put the South Stream behind it and was determined go ahead with the Turkish Stream Project. "This is belies claims made by certain media organs that Russia would give up on the Turkish Stream project. Despite all the economic difficulties its facing, Russia is standing by its word," said Ertem.

Meanwhile, Turkish President Recep Tayyip Erdoğan met with his Azeribaijani counterpart Ilham Aliyev in Ankara yesterday. Strategic partnerships about regional issues were discussed and during the press conference Erdoğan stressed the strategic importance of Trans-Anatolian Pipeline Project (TANAP project), which is being constructed to transfer natural gas from Shah Deniz on the Caspian Sea to Europe via Turkey. "TANAP grew into a global project and the necessary steps have been taken," Erdoğan said. "The majority of companies to supply the pipes and carry out the construction work for the gas pipeline are Turkish companies." The TANAP project is planned to start at the Georgia-Turkey border, pass through Anatolia, and extend 2,000 kilometers to reach Greece. It will then connect with the Southern Gas Corridor that will carry natural gas from the Caspian Sea near Azerbaijan to Italy into Europe. Aliyev also underscored in the press conference the importance of the Southern Gas Corridor. "The Southern Gas Corridor and the development of the Shah-Deniz natural gas field is Europe's biggest infrastructure investment project and worth $45 billion," said Aliyev.

"Considering the projects on the table, Turkey is becoming the wider region's natural gas corridor without any natural resources" stated Ertem.