‘No going back’ for Turkey-Africa trade 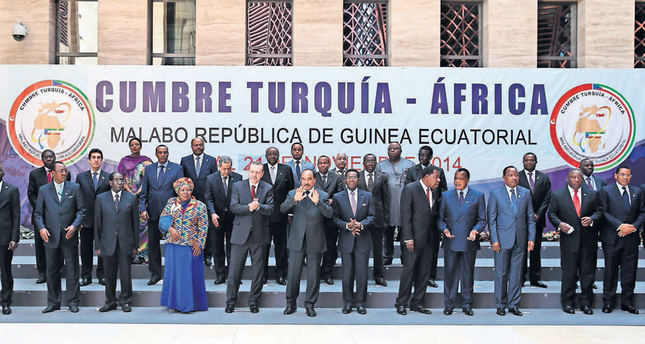 President Erdoğan is visiting Ethiopia and Djibouti marking a step forward in Turkish-African relations especially regarding increasing trade volumes, which economists say are as a significant strategy for the future

Turkey's moves to gain more influence in African trade is "at the point of no return" and "should go on" despite the presence of giant competitors on the continent. This was the view of economic analysts speaking ahead of President Recep Tayyip Erdoğan's 12-country African visit starting this week. Erdoğan begins the first visit of 2015 today by visiting two East African states: Ethiopia and Djibouti.

Turkey has increased its interest in the largely developing Sub-Saharan countries over the past decade and has had a significant impact in the Horn of Africa region. Sedat Aybar, an economist from Istanbul's Aydin University, said Turkey is at the "point of no return" in the region, and its opening-up to Africa should be supported for the country to reach "the strategic place Turkey has drawn for herself as a global player in world affairs."

Between 2005 and 2013, Turkish trade with Sub-Saharan nations increased by more than 30 percent, while total trade volume of the country surged by more than 20 percent, with trade volume reaching $7.5 billion in 2013. Adding in North African countries, where Turkey's closest business partners are located, this trade volume figure almost triples to more than $20 billion. Despite the surge, this number cannot compete with the giant Chinese economic machine, which is eyeing further partnerships with African countries. The trade volume between Africa and China exceeded $200 billion in 2013 and is expected to rise to $280 billion by this year. Aybar accepts that Africa accounts for a "still miniscule" part of Turkish trade, but its growth is faster than any other region, as Turkey eyes a trade volume worth $50 billion with African countries by 2023 in its centennial goals. The ambitious interests of Chinese investors has not been, of course, out of the blue, as the economies of Sub-Saharan countries grew by 4.7 percent in 2013 and are expected to surpass 5 percent in 2015 at a "moderately rapid pace," according to the World Bank.

According to the International Monetary Fund's 2014 outlook, six of the world's 10 fastest-growing countries were on the African continent. "For a win-win case, it is in Turkey's best interest to promote cooperation rather than competition and vice versa," Aybar said, adding that Turkey should cooperate more with other emerging countries in term of its investments to provide "complementary sectorial inputs," especially in infrastructure.

Turkish policy focuses more on East Africa, where its influence is stronger than in any other region; as Aybar puts it, the horn is "an important bridgehead for Turkish entry into Sub-Saharan Africa." Somalia is the first country that enjoyed Turkish donations of more than $360 million in recent years, according to Foreign Ministry figures, and Turkey has also given away more than $1 billion to African countries so far, Aybar said. Turkey's presence in Somalia became prominent, when then-prime minister Erdoğan paid a visit to the country in 2011 to attract the world's attention to a famine crisis. Recently, Economy Minister Nihat Zeybekci was in Addis Ababa and signed a deal to lease a 5 million square meter area for 99 years to build a trade center for Turkish companies. "Somalia also provides a case for promoting Turkey's opening-to-Africa strategy, which is officially based on humanitarian grounds," Aybar said, as Turkey enforces a policy of "African solutions to African problems."

Turkey has opened 27 more embassies in African countries since 2002, mainly in the Sub-Saharan region - a signal of its diplomatic focus - while Turkey's cooperation agency, TİKA, has nine offices in the region. The second Turkey-Africa Partnership Summit was held in November 2014 in Malabo, the capital of Equatorial Guinea, six years after the first one was held in 2008; this period has seen Turkey become one of the largest donor countries with an aid volume nearing $1 billion, according to Aybar. The national flag carrier, Turkish Airlines, now has flights to more than 42 destinations in 27 African countries as well.

However, according to Hasan Basri Yalcin, professor of international relations at Istanbul Commerce University, although this sort of soft power can advance Turkey up to a point, success ultimately depends on financial capabilities. "When it comes to the trade deals, it is true that money has no religion. Therefore, I do not believe this kind of an approach would be prevalent," Yalcin said, referring to comments that Turkey aims to use its cultural ties to strengthen business relations.

The coordinating chairman of the Turkish-African business councils in Turkey's Foreign Economic Relations Board, Tamer Taskin, said that the biggest challenge for Turkish companies operating in Africa is financing. He urged more funding from Turk Eximbank, which supports Turkish international trade, and more Turkish bank branches in Africa to finance further infrastructure and construction bids. Turkey offers products at "European standards with Asian prices," according to Taskin, highlighting automotive, chemical and agricultural investments as areas with potential for further cooperation. Taskin said that Turkish direct investment increasingly flows into African countries, ranging from an appliance factory in South Africa to a textile factory in Ethiopia. Turkish foreign direct investments to Africa reached $6 billion in total up to 2014, according to foreign ministry data.

Turkish companies' spotlights will be locked on African states as the country attempts to move from a humanitarian perspective to providing scholarships to African students. As Professor Yalcin puts it, African markets will continue to draw Turkish interest, especially for diversifying its business partners around the globe especially, as Turkey's largest trade partner - the European Union - seem to remain in short-term stagnation.