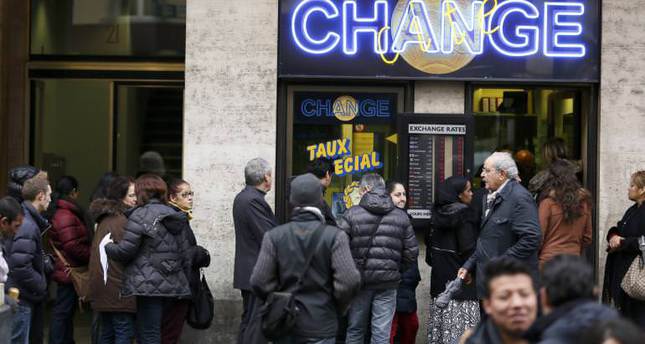 Croatia considering converting mortgages from Swiss francs to the local kuna to avoid more pain regarding the surge in the franc’s value and Poland plans to ease interest rates, eyes ECB decision

Croatia could convert mortgages denominated in Swiss francs into the local kuna currency, it said yesterday, scrambling to cope with a surge in the franc's value that has hit hundreds of thousands of homeowners across central and eastern Europe. In Poland - the country worst affected by the Swiss National Bank's surprise decision last week to scrap its three-year-old cap on the value of the franc - some banks indicated they would ease interest rates on such loans, taken out by 550,000 Poles. A longer-term solution, however, may await the outcome of a European Central Bank decision today widely expected to launch a sovereign bond-buying program that could push the franc even higher.

The governments in Zagreb and Warsaw want to avert any threat to the banking system that could be triggered by widespread defaults on loans and lower profitability, while they are keen to be seen to be taking strong action to protect borrowers as elections loom this year. Homebuyers across the region took out loans denominated in Swiss francs in the early 2000s, attracted by interest rates in the low single digits over paying double-digit rates on mortgages in their local currencies. They had already faced rising repayments as the franc strengthened with the onset of the global financial crisis in 2008, but repayments have soared since last week, with the franc jumping 20 percent against the Polish zloty. The scale of the problem is illustrated by the fact Poland and Croatia's stocks of franc-denominated home loans - worth about $36 billion and $3.5 billion respectively before the scrapping of the franc cap - represent around 7-8 percent of those countries' gross domestic product (GDP).

In Croatia, where about 60,000 homeowners took out franc-denominated home loans, Prime Minister Zoran Milanovic said his government would consider following the example of Hungary in converting loans into the local currency. Milanovic, trailing in opinion polls ahead of the election, is already seeking approval from parliament to fix the franc rate at 6.39 kuna for one year. "We will consider a possible conversion of loans into kuna and see if it is feasible. It is important that the banks remain profitable, but the risks must be shared," he told parliament.

Poland, central Europe's biggest economy, has given no indication it will go down the same path, and central bank board member Andrzej Raczko said it may in fact violate Polish law. Most Poles who took franc-denominated mortgages have a clause in their contracts saying that they pay an interest rate that is a sum of the Swiss franc interest rate (CHF LIBOR) and a bank's margin, typically around 200 basis points. Polish Finance Minister Mateusz Szczurek called on local banks on Tuesday to urgently amend loan rates by applying the below-zero interest rates of Switzerland, calling it a "fair deal".

Several banks with the biggest portfolios of currency mortgages have said they would heed the call; others said they needed more time to look at clients' contracts. "MBank, honouring the provisions of mortgage credit contracts in Swiss francs, applies the principle that the negative value of CHF LIBOR is deducted from the credit margin," said a spokesman for the Polish unit of Commerzbank. Its portfolio of Swiss franc-denominated loans was worth 17.7 billion zlotys ($4.7 billion) at the end of 2014. A spokesman for BCP's Polish arm Millennium said: "We change the interest rates every quarter, so if the CHF LIBOR is minus 0.75 at the end of March, starting from April 1, clients will pay lower interest." Its franc-denominated loans were worth 18.8 billion zlotys as of the end of September. Raiffeisen Bank International's Polish arm Raiffeisen Polbank and BPH said they would also use the Swiss rates. Other banks including Santander's BZ WBK were yet to decide.

One banker said a typical franc mortgage monthly instalment would rise by about 13 percent, or 155 zlotys ($42), following the Swiss move. But a large number of clients say their monthly instalments have already soared by 900 zlotys or more. "My instalments have risen by 300 zlotys; this will significantly change my normal life and I will have to give something up," said 52-year-old borrower Andrzej Palka, who receives disability benefits. The Polish central bank has said it does not believe the franc will reach the level of 5 zlotys from its present 4.27. But if the ECB decides on Thursday on outright money-printing, the euro may weaken against the Swiss franc, and the zloty may follow suit. "All eyes are on the ECB. If the Swiss franc rises again, the whole debate on how to help FX mortgage holders will start all over again," said Kamil Stolarski, an analyst with Espirito Santo.